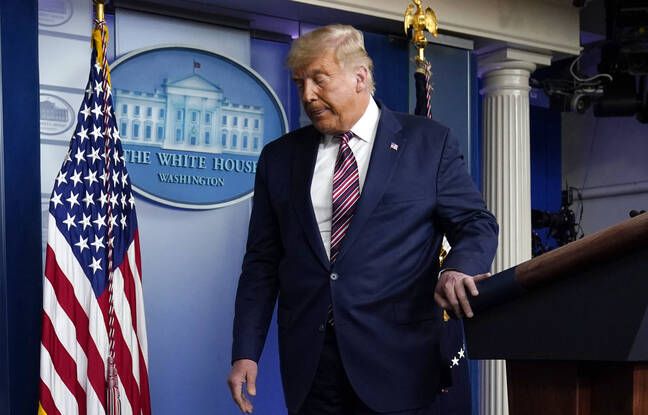 MSNBC cut away from Trump after 40 seconds.

It’s basically performative nonsense at this point for them to constantly go to Trump, air his bullshit, and then go ‘ah, we hate to do this, but we have to cut away from Trump because he’s lying’

“Well, here we are again in the unusual position of (having to) not only interrupt the President of the United States, but also to correct the President of the United States,” blurted out the presenter, Brian Williams. ABC and CBS have done the same. They then fact-checked the American president, recalling that he had not won, and that his accusations of fraud were not proven. CNN has decided not to cut Donald Trump’s microphone, but its star host Jake Tapper followed with a final conviction of the head of state. “What a sad night for the United States of America to see its president (…) falsely accuse people of trying to steal the election”, he declared, by castigating a “web of lies”.

“Spread the truth, not conspiracies”

“Our job is to spread the truth, not baseless conspiracies,” the newspaper explained. USA Today, which also interrupted the broadcast on its site.

On the fraud charge side, in Georgia, a witness claiming that ballots were cast after the cut-off time retracted, prompting the judge to refuse to suspend the recount. In Michigan, the magistrate considered that the cases denounced by Donald Trump’s lawyers were “hearsay” (hearsay). And for the so-called deceased voters, some images of suspicious birthdays come from the machines that scan the ballots and sometimes have trouble reading certain characters.

Republicans are stepping up to the plate

Several Republicans have denounced Donald Trump’s remarks. “As a Republican who just won in a Blue District (Democrat), I am embarrassed and ashamed of what I just heard from POTUS (president of the United States),” wrote William Cogswell, a local councilor in Arizona.

As a Republican who just won in a Blue district, I am embarrassed and ashamed by what I just heard from POTUS.

“No Republican should accept the president’s words. Unacceptable. Point bar. », Reacted the former senator Jeff Flake, who regularly criticizes Donald Trump. Mitt Romney, who doesn’t really have the President in his heart, called for letting the count run its course, as did Senator Patt Toomey.

No Republican should be okay with the President’s statements just now. Unacceptable. Period.

A sitting president undermining our political process & questioning the legality of the voices of countless Americans without evidence is not only dangerous & wrong, it undermines the very foundation this nation was built upon. Every American should have his or her vote counted.

Will Hurd, a local representative from Texas, ruled that “a president calling into question, without proof, the legality of the voices of many Americans is not only dangerous, it undermines the foundations on which our nation was built.” “