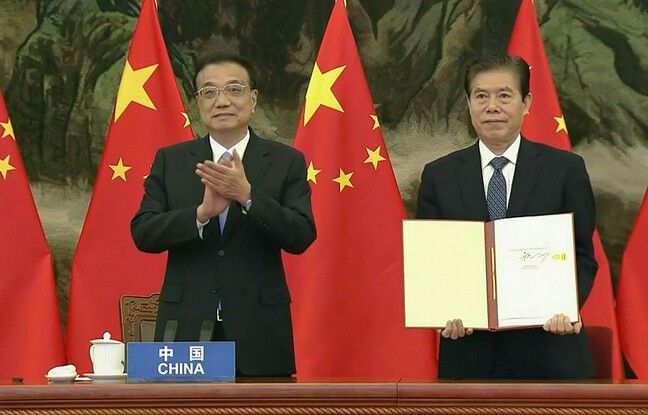 Fifteen countries in Asia and the Pacific signed an important trade agreement on Sunday, promoted by China, on the occasion of the closing of a virtual summit of Asean which began on Thursday. This Regional Comprehensive Economic Partnership (RCEP) is becoming the world’s largest trade agreement in terms of Gross Domestic Product, analysts say, and will affect more than 2 billion people. It aims to create a gigantic free trade area between the ten ASEAN states (Indonesia, Thailand, Singapore, Malaysia, Philippines, Vietnam, Burma, Cambodia, Laos and Brunei), China, Japan, South Korea. South, Australia and New Zealand.

“I am happy that after eight years of complex negotiations, we can officially end the RCEP negotiations today,” said Vietnamese Prime Minister Nguyen Xuan Phuc, whose country holds the rotating presidency of ASEAN. This pact, the idea of ​​which dates back to 2012, is seen as the Chinese response to an American initiative that has now been abandoned. It “consolidates the broader regional geopolitical ambitions of China around the” new silk roads “, analyzes Alexander Capri, professor at the Business school of the National University of Singapore.

“This clearly shows that multilateralism is the right way”

“In the current global circumstances, the fact that the RCEP was signed after eight years of negotiations brings a ray of light and hope amid the clouds,” Chinese Premier Li Keqiang said after the virtual signing. “This clearly shows that multilateralism is the right way and represents the right direction of the world economy and the progress of mankind,” he added. The RCEP, whose members represent 30% of global GDP, will be “a major step in the liberalization of trade and investment” in the region, said Rajiv Biswas, chief economist for Asia and the Pacific of the consultant. IHS Markit.

The signing of this agreement comes in a context of severe economic crisis due to the Covid-19 epidemic for the ten members of the Association of Southeast Asian Nations (Asean). Many signatories are still battling the coronavirus and are hoping RCEP will help them cushion the cost of the pandemic, which has put a huge drag on their savings. “The Covid has reminded the region why trade matters and governments are more keen than ever for positive economic growth,” said Deborah Elms, executive director of the Asian Trade Center, a consultancy based in Singapore.

This trade pact is also widely seen as the way for China to expand its influence in the region and determine the rules, after years of passivity on the part of the United States during the presidency of Donald Trump. In January 2017, the latter had withdrawn his country from the major competing project, the Trans-Pacific Free Trade Treaty (TPP), promoted by his Democratic predecessor Barack Obama. President-elect Joe Biden could nevertheless be more involved in the region, like Barack Obama, judge Alexander Capri.