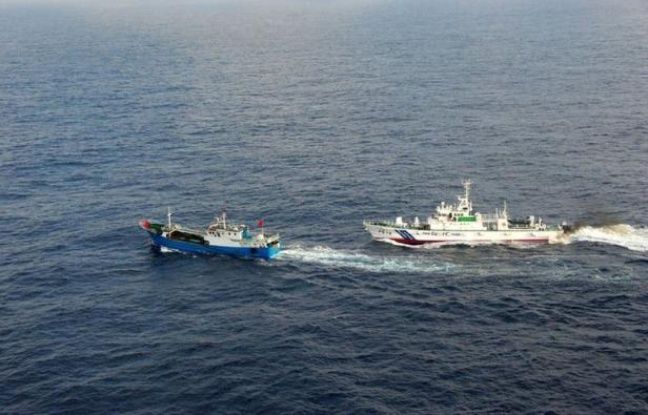 Hundreds of fishing vessels, mostly Chinese, frequently disappear from public radars off Argentina, denounces Wednesday the report of an NGO for the defense of the oceans, for which these cover-ups probably cover a “looting” of resources. marines. The American association Oceana analyzed, over a period of three and a half years (January 2018 to April 2021), the GPS signals transmitted by some 800 boats then in activity near Argentinian waters.

Thanks to the Global Fishing Watch site, which she launched with Google and the company SkyTruth, she can visualize their route on a map and determine, thanks to algorithms studying their trajectory and speed, their fishing activities. Over the period, 900,000 hours of “visible fishing” were detected, in an area of ​​international waters between the border marking Argentina’s exclusive economic zone and only up to 20 nautical miles offshore. .

Almost 70% of that number of hours was flown by about 400 Chinese ships, and 26% by South Korean, Spanish and Taiwanese ships, and only 1% by Argentinian ships. Above all, the activities of these ships were “hidden” for more than 600,000 hours, says Oceana. On more than 6,000 times, the Automatic Vessel Identification (AIS) system failed to transmit information for more than 24 hours, thus disappearing from the chart, often for several days.

“These ships which disappear along the Argentinian national waters could be looting its waters illegally”, denounced an official of the NGO, Beth Lowell, in a statement. In April 2020, boats were caught red-handed in Argentinian waters, with their identification system turned off, reports Oceana.

More than 66% of these suspicious vessels identified by the NGO were Chinese boats fishing for squid. Squids migrate offshore to reproduce, and since they only live for one year, “overfishing (…) can have serious repercussions for the population (of the species) the following year,” the report explains. However, many other species feed on them, such as tuna or swordfish.

About half of the world’s squid fishery comes from Argentina, for which the fish industry is economically important. The report also points to the Spanish boats, of which nearly 90% “have apparently turned off their public tracking device at least once”. The NGO calls for better control of these fleets of foreign boats, in particular by making the use of the automatic identification system of vessels compulsory at all times.