Constrained by the government, supermarkets are closing their non-essential shelves 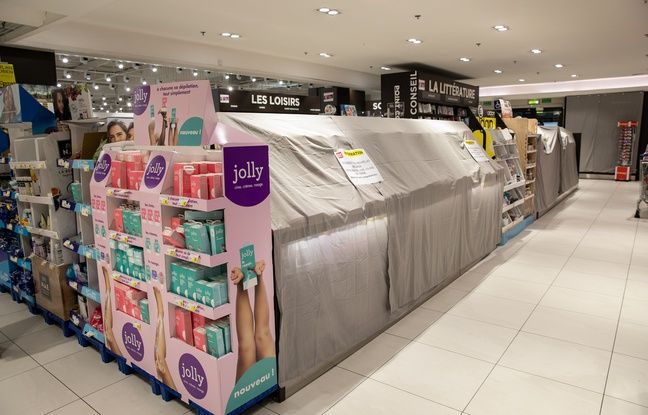 First day of the ban on the sale of “non-essential products”. This Wednesday, supermarkets have implemented the restrictions decided by the government: displays barred by ribbons, signs with a “forbidden direction” or reorganization of shelves.

“It’s weird to see all these rays blocked, it’s even ridiculous in fact. I have the impression of being on a building site doing my shopping, it’s not very pleasant, ”notes Annie, basket in hand, in a Monoprix store in eastern Paris. Around it, few customers circulate in the aisles just after opening, overwhelmingly on the food side, while several employees are busy tidying the shelves.

This photo, taken by Olivier Pernot at the Monoprix in Marcq-en-Barœul 😳 pic.twitter.com/k3pHQ16jnT

“I find that normal”

In Aubervilliers, near Paris, Nicole walks around, a toasted bulb in her hand. “I came to buy a light bulb for my 93 year old mother. I do the shopping for him and I find it normal that these departments close. There is no reason for small traders to close and not others, ”she says, denouncing, however, the“ illogical ”decision to close these small stores. “My mother does her shopping in small traders, not in supermarkets,” she insists.

Since Wednesday morning and for the duration of the confinement, supermarkets can only market a limited number of products, starting obviously with food, but also – among others – newspapers, stationery, construction materials, as well as toiletries, hygiene, maintenance and childcare products.

I send all my encouragement to the thousands of employees and members https://t.co/ltJeDHpOQm (as well as to our competitors) who will have to upset hundreds of departments throughout France in a few hours. pic.twitter.com/zZLmLCfU6p

For other departments, clothing, toys and books in particular, they are now prohibited from selling their content. A decision taken by the government under pressure from small businesses, administratively forced to close and demanding fairness. Consequently, each store had to organize itself to respect the instructions, while the threat of controls and sanctions looms.

In several stores, these departments were simply condemned using ribbons and their access blocked by signs displaying a forbidden direction and a mention explaining that the closure is linked to a decree.

“I would like small traders to be able to reopen”

At Monoprix, signs invite customers to go to the chain’s website to order and have it delivered to them or to use “click & collect” (collection in store). “We are forbidden to sell when we have stock. Instead of finding solutions so that everyone can work normally, we penalize all traders without distinction, it is small-time management, ”plague Aurore (the first name was changed at her request), an employee .

Nearby, Hervé almost laughs at the situation: “If I want to buy a book, I have to go through the Internet. But if I want alcohol, it’s “open bar”, my wine merchant is open, my supermarket sells it. It will be necessary to explain to me why it is essential… ”Régine, she came out of curiosity, to see“ what it looks like these closures in supermarkets ”, after hearing about it in the media. “I like to see things. But I would like small traders to be able to reopen. Do you think the Auchans, Leclercs and company will let it go? She asks, pointing to the closed shelves.

Decision in favor of e-commerce platforms

On social networks, Internet users also shared on Wednesday photos of stores that had to comply with the government injunction, with shelves covered with plastic film or a sign denouncing a decision favorable to online shopping platforms, starting with Amazon.

The various federations of traders, which were to be received this week in Bercy, called on the government on Monday to be able to reopen all shops from November 13.