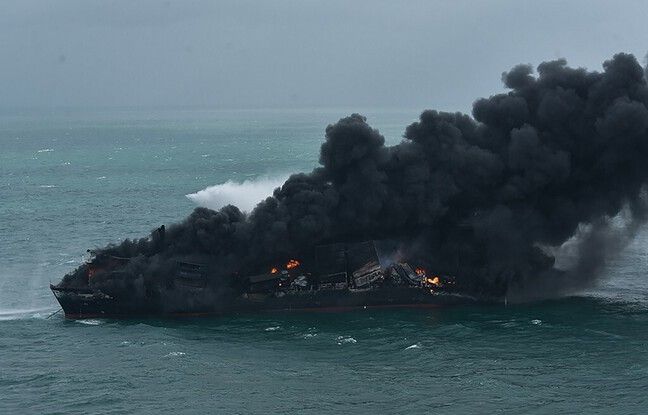 A container ship on fire off the coast of Sri Lanka for a week threatens to break and cause an oil spill by dumping hundreds of tons of fuel into the Indian Ocean, authorities said on Thursday.

For a week now, the fire aboard the container ship X-Press Pearl, registered in Singapore, has been raging without the efforts made to control it, in particular because of the violent winds. A military helicopter dropped nearly half a ton of flame retardant chemicals on the ship on Wednesday, to no avail.

The Indian Coast Guard joined a Sri Lankan Navy ship and four tugs in an attempt to put out the fire on the X-Press Pearl, whose cargo included 25 tons of nitric acid. The fire weakened the structure of the 186-meter-long ship which could break and drain of its oil, according to the Sri Lanka Marine Environment Protection Authority (MEPA). “The fire stretches the entire length of the ship. The hull might not be stable enough for us to tow it out of our waters, ”said Dharshani Lahandapura, MEPA President.

The ship, anchored off the port of Colombo, is also carrying 278 tonnes of bunker fuel and 50 tonnes of marine diesel, she added. The container ship was on its way to Colombo from the Indian state of Gujarat when the fire broke out 14 km off the coast on May 20. It would have taken in a container of nitric acid and quickly spread to the rest of the ship, said Dharshani Lahandapura.

A member of the hospitalized crew

Authorities are investigating the circumstances surrounding a nitric acid leak that the crew allegedly noticed even before entering Sri Lankan waters. “If the problem had been resolved then, we would not be facing this crisis,” added the official, worried about the tourist and fishing region of Negombo, 40 kilometers north of the capital. Given the very rough seas and strong monsoon winds, it seems impossible, she said, to contain any spill. The army will be deployed to clean up Negombo beach if necessary, she said, adding that the cleanup would take weeks or even months.

A Sri Lankan navy spokesman said on Wednesday all 25 crew members were unharmed except for one member hospitalized with minor injuries. In September last year, the tanker New Diamond burned for a whole week off the eastern coast of Sri Lanka after an engine room explosion that killed a crew member. An oil spill 40 kilometers long followed. Sri Lanka demanded $ 17 million from the owners of the supertanker to cover the cleanup costs.