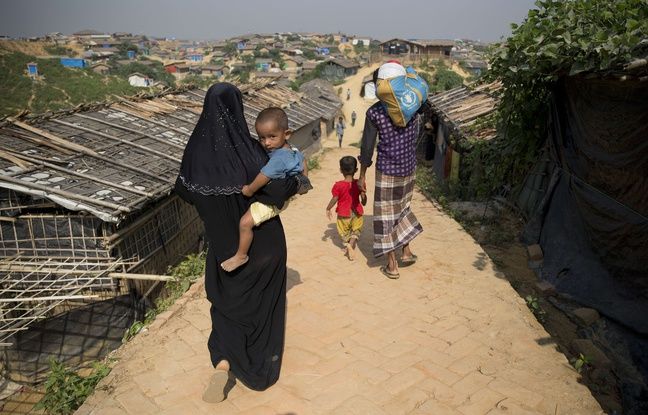 Despite opposition from human rights organizations, Bangladesh began transferring a second group of Rohingya refugees to a remote island in the Bay of Bengal on Monday.

More than 1,600 members of this Muslim minority who had fled neighboring Burma where they were persecuted have already been taken to the island of Bhashan Char in early December. About a thousand more are in the second group, Bangladeshi Foreign Minister AK Abdul Momen said.

The island, “100 times better” than the camps according to some

Buses picked them up in the refugee camps of Cox’s Bazar, where nearly a million people live, to take them to Chittagong port, from where they will leave for this island cut off from the world and vulnerable to cyclones and floods ” They go there on a voluntary basis. They can’t wait to go there because their relatives who are already in Bhashan Char told them it is a great place, ”said AK Abdul Momen. He added that the island was “100 times better” than the camps and that the refugees were asking to go. “Bhashan Char is a very beautiful site. It is a beautiful complex. Those who go there love it, ”said the minister.

Two Rohingya refugees in this group said they were going there voluntarily. Nur Kamal, a Rohingya living in the gigantic Kutupalang camp, explained that he was joining relatives on the island who were already there: “What is the point of staying without them (in the camps)? Serajul Islam, who is going there with five members of his family, also said that no one is forcing him to do so. “Given the way the international community is handling our file, there is no future in the camps,” he said. “Better to go there and spend the rest of my life, to live in better accommodation. At least I won’t have to worry about flooding in the rainy season or the unbearable heat in the summer. “

About 750,000 Rohingya Muslim refugees, a persecuted minority in a predominantly Buddhist Burma, fled in 2017 an ethnic cleansing carried out in the west of this country by the army and Buddhist militias, described as genocide by the UN. After the first transfer on December 4, some Rohingya had claimed to have been forced to agree to go to the island. Dhaka has long wanted to displace 100,000 Rohingya refugees.

This controversial project, denounced by many NGOs and international organizations, is the subject of strong opposition from the Rohingya community. The UN says it was not involved in this process. “Statements from refugees that money was offered to Rohingya families to agree to go to Bhashan Char, or about acts of intimidation raise questions about the displacement process,” Saad Hammadi said , from the organization Amnesty International. AK Abdul Momen for his part denounced the fabrications of the detractors of this project.