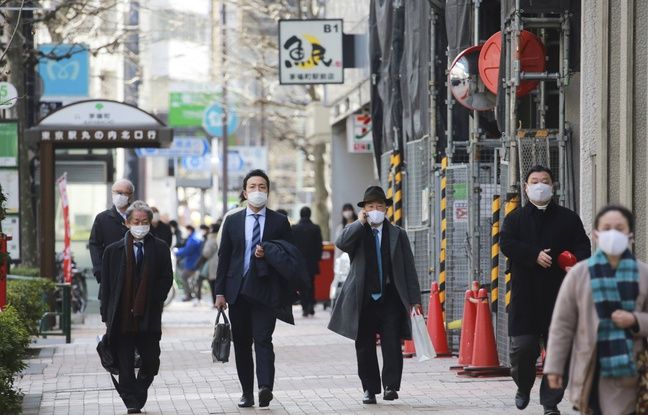 It’s the tumble for the third largest economy on the planet. As a result of the health crisis, Japan’s gross domestic product fell 4.8% in 2020, according to preliminary figures released by the government on Monday. This is the first annual contraction of the archipelago’s GDP since 2009.

Japan had seen its economy fall sharply in the first part of the year, especially between April and the end of June (-8.3%), whole sections of economic activity having been paralyzed during the state of emergency. in the spring by the government in the face of Covid-19. The economy rebounded from mid-year onwards, however, exceeded expectations in the fourth quarter (+ 3%), above all after a sharp recovery of 5.3% over the July-September period.

Japanese exports drove growth at the end of the year, having further accelerated their rebound in the fourth quarter (+ 11.1% over one quarter). Japanese household consumption continued to be dynamic between October and the end of December (+ 2.2%), also contributing significantly to growth. And after two quarters of decline, non-residential business investment also started to rise at the end of the year (+ 4.5%).

However, the renewed momentum of Japanese GDP since mid-2020 may be interrupted in the first quarter of this year, even if the outlook for 2021 as a whole remains good, according to economists. Because the government has put in place a state of emergency since the beginning of January in several departments of the country, including those of Tokyo and its suburbs, to try to stop a strong local upsurge of the coronavirus since the end of 2020. Although being lighter than the first state of emergency of spring 2020, this device, which is to last until March 7, risks breaking the positive dynamic of household consumption.