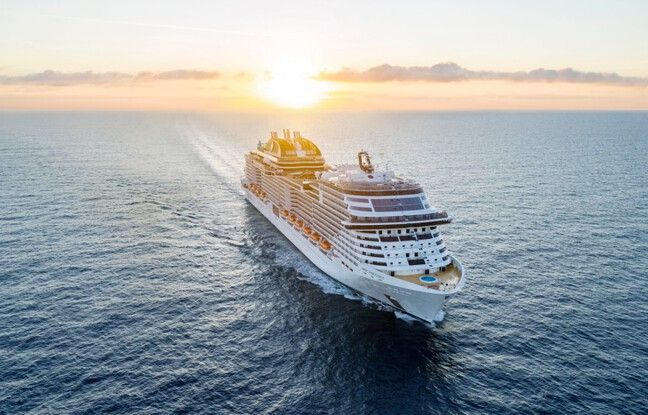 The coronavirus has spared no sector, and especially not that of cruise ships. In Saint-Nazaire, the MSC Virtuosa, last born of Chantiers de l’Atlantique and sistership of MSC Grandiosa, has been blocked at the quayside for several months due to the sanitary context. Next week, he should finally leave the maritime city before starting his cruises in northern Europe normally in May. Here is a brief overview of the challenges that await cruise ships in the months and years to come, and not only in terms of health.

Thursday, 20 Minutes was one of the privileged people who were able to discover the interior of the liner MSC Virtuosa. And we don’t mess with protocol, believe us. After having carried out an antigen test (negative for all the lucky ones), we never took off our mask obviously… “What happened on the Diamond Princess in March 2020, when everyone remained on board after the discovery of positive cases, that will not happen today, explains Patrick Pourbaix, general manager of MSC (navigation company) for France, Belgium and Luxembourg . For many, the cruise ship is the worst place to go. Today, we have demonstrated the opposite. The cruise ship is the most safe to go on vacation. “

The protocol is very strict. The ships are only 50% full so that physical distancing is fully respected. After performing a PCR test within 72 hours before boarding, passengers re-test for antigen upon arrival. Another is done in the middle of the cruise. The temperature is also taken from each passenger twice a day. And if a person is positive on the water, they will be isolated “in a separate protected and ventilated cabin” and “at the first stopover, they are disembarked and taken care of”.

An economy to revive

For a year now, cruising has not really been fun. “We suffered the crisis head-on, recognizes Patrick Pourbaix. From March 15, 2020, no more cruise ships were allowed to navigate. As a result, the 300 cruise ships in the world were stopped for five months. In a normal year, MSC Cruises, one of the world’s top 4 cruise lines and number 1 in Europe, welcomes 2.5 million passengers. In 2020, they were only 55,000. The managing director of the navigation company will not give us any figures in euros… “It’s unheard of, we hope that the horizon will open for May. Currently, the only cruise ship at sea is the MSC Grandiosa.

An environmental issue to pursue

Are cruise ships a poor performer when it comes to pollution? It is necessarily a criticism that comes back like an antiphon. “There is a challenge for the maritime transport industry, that is to say shipyards, ship owners and charterers, is to reduce the carbon footprint of the global fleet by 50% in 2050 by compared to the 2008 benchmark ”, indicates Henri Doyer, program director at Chantiers de l’Atlantique in Saint-Nazaire. A research and development plan was created at Chantiers de l’Atlantique specifically on this subject in the early 2000s. “First of all, the impact on water is very well controlled. The liner produces its own water mainly on the basis of energy which is recovered. These discharges are all treated in treatment plants. As for oily and greasy water, they are strictly prohibited. “

For the atmosphere, “there are the pollutants, that is to say the products which are dissipated in the air such as sulfur oxide and nitrogen oxide”, specifies Henri Doyer. Filtration and purification systems are installed. ” The MSC Virtuosa has for example catalytic converters which reduce nitrogen oxides. In addition, large washing towers are installed on the top of the ship to reduce the emission of sulfur oxides to less than 0.1%. “For greenhouse gases, what is called the carbon footprint,” we are trying to make boats that consume less thanks to hydrodynamics with efficient hulls and propellers “.

Finally, “the vector of the future” is to change the type of fuel oil. “We must then use fuel oils which emit less pollutants and carbon dioxide,” explains Henri Doyer. The first for this is liquefied natural gas [GNL]. In recent hours, Total and MSC Cruises have also signed an agreement for the annual supply of approximately 45,000 tonnes of LNG for the next LNG-powered MSC Cruises cruise ships which will call at the port of Marseille. With this fuel, a cruise ship will reduce its sulfur dioxide and particulate emissions by 99% and nitrogen oxide by 85%. The MSC Virtuosa will thus be the last oil-fired liner.