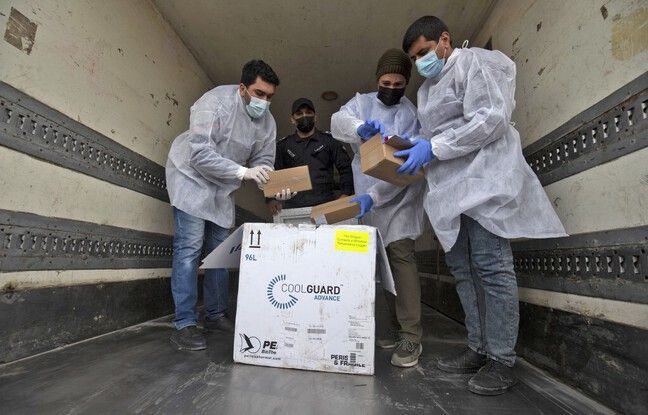 After the blockade of the transfer by the Hebrew state earlier this week, a first batch of vaccines against the coronavirus arrived in the Gaza Strip on Wednesday, which should make it possible to immunize 1,000 people, said the Palestinian and Israeli authorities. .

“Two thousand doses of the Russian Sputnik vaccine have arrived [à Gaza] from the Ministry of Health in Ramallah, ”the authorities of Hamas, the Islamist movement in power in the Palestinian enclave under Israeli blockade, said in a statement.

“They are being transported to storage spaces” in Gaza City, Hamas continued. Each Russian Sputnik V vaccine contains two doses of the product. The health ministry in Ramallah, West Bank – a territory separated from Gaza by Israel – said they were intended for Gazan medical staff. The Cogat, the Israeli body in charge of civilian operations in the Palestinian Territories, confirmed this transfer “via the Kerem Shalom crossing point”, which separates Israeli territory from the enclave.

The transfer took place at the request of the Palestinian Authority and with “the approval of the political level. [israélien] “, According to Cogat, which for its part indicated that” 1,000 vaccines “had been sent. The Palestinian Authority in the West Bank accused Israel on Monday of refusing the entry of thousands of Covid-19 vaccines into Gaza, an enclave of two million people. The Cogat had said for its part that the Palestinian request for entry of vaccines was “under examination and awaits (a) political decision”. Hamas had denounced Tuesday a “crime” in “violation” of international law.

More than 500 dead in Gaza Strip

In Gaza, more than 53,800 infections have been recorded since the start of the pandemic, including 538 deaths, but medical sources have reported a decrease in hospitalizations in recent weeks. In the West Bank, the Ministry of Health has officially recorded more than 116,600 cases, including more than 1,400 deaths.

The Palestinian Authority launched vaccination in the West Bank to its medical staff in early February after receiving 2,000 doses from the Jewish state. She also received 10,000 doses of the Russian Sputnik V vaccine and had indicated her intention to share some of it with Palestinians in Gaza. It was to receive in mid-February at least 50,000 other vaccines thanks to the “Covax” device to help the poorest countries, set up by the World Health Organization (WHO) and the Alliance for vaccines.