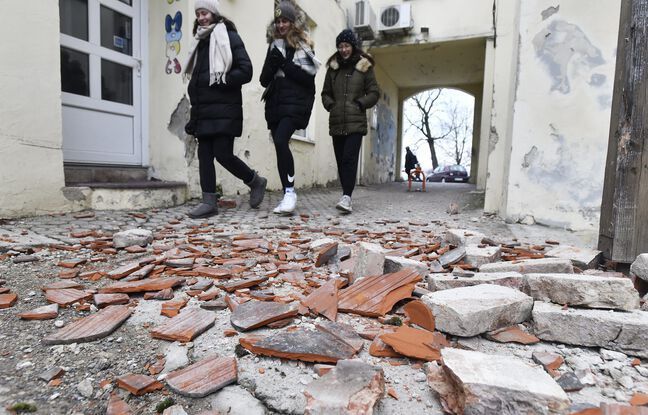 The earth shook in Croatia. A 6.4 magnitude earthquake hit the country on Tuesday, causing buildings to collapse in the city of Petrinja (center), the American Geophysical Institute (USGS) announced.

The epicenter of the quake, which took place at around 11:30 a.m. GMT, was located about 50 kilometers southeast of Zagreb, where panicked residents rushed into the streets and residential tiles fell in land, AFP noted.

“We are currently removing people from the rubble, we still do not know whether there are dead or injured,” Petrinja mayor Darinko Dumbovic told a local television station. “It is general panic, everyone is trying to find out the fate of their relatives,” he added.

Help intervened very quickly in the city, where the army was also deployed. Rescuers and soldiers were looking for possible victims trapped under the rubble. Electricity was cut in the city center.

A Slovenian power station shut down “as a precaution”

The quake was felt in neighboring Slovenia, including the capital Ljubljana, as well as other countries in the region, Hungary and Austria, witnesses and media reported. The Slovenian nuclear power plant in Krsko was shut down “as a precaution”.

Images of Petrinja, which has a population of nearly 20,000, showed collapsed roofs and streets littered with bricks and other debris.

“I’m afraid, I can’t reach anyone at home, the phones don’t work anymore”, confided to a Croatian media a resident of this city, obviously very worried.

“We are ready to help”, reacted on Twitter the boss of the European Commission, Ursula von der Leyen. “Our hearts go out to the injured and to the rescuers”, also commented Charles Michel, President of the European Council.

After another powerful earthquake in Croatia, the 2nd in the past 2 days, I spoke with Prime Minister @AndrejPlenkovic again.

We are ready to support. I have asked @JanezLenarcic to stand ready to travel to Croatia as soon as the situation allows.

We stand with Croatia.

Our thoughts go out to the injured and frontline workers.

At this difficult time, the European Union offers its full support and assistance to the people of Croatia and PM @AndrejPlenkovic

An area of ​​high seismic activity

The Balkans are an area of ​​strong seismic activity and earthquakes are frequent there.