Deprived of festivities, the winegrowers organize themselves to have Beaujolais Nouveau tasted 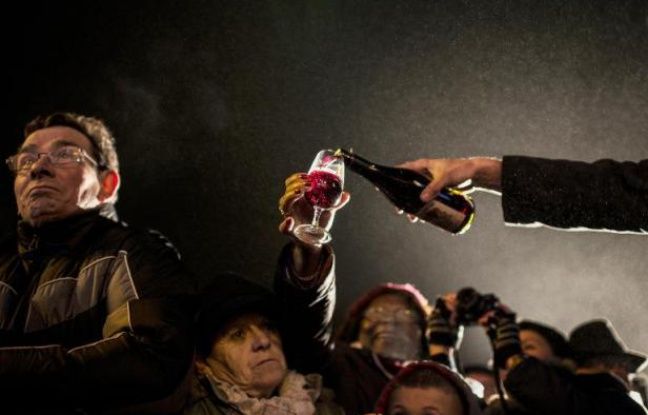 This Wednesday evening, the streets of Lyon will remain deserted and deprived of the usual effervescence that accompanies the drilling of Beaujolais Nouveau, organized each year in the city and in Beaujolais to celebrate the arrival of the first fruit. A seventy-year-old tradition that winegrowers had to give up for the first time because of the sanitary situation. But Covid or not, in Beaujolais, wine producers have stepped up efforts and initiatives, to allow the public to discover the primeur, from this third Thursday in November, and to promote their wines.

Because in the vines too, this year 2020, entangled in the health and economic crises linked to the coronavirus, will leave traces. “We generally managed to get through the first confinement without too much damage. Before March, we had taken a little head start on sales. And then during the first confinement, the consumption of wine at home was good for our style of vineyard ”, underlines Dominique Piron, president of Inter Beaujolais, the inter-profession of Beaujolais wines. So much so that at the end of June, wine sales were almost equivalent to 2019. “Collectively, there is not too much anxiety, we should get out of it,” adds the winemaker. But it’s uneven, there are very difficult situations ”.

Take-out or #ClickandCollect : many #restaurants have changed their habits! Discover them here: https://t.co/PBzkd4aNHw A boon for #gourmands, as the arrival of the #BeaujolaisNews.🍷#ilovebeaujolaisnouveaux #Beaujolais #takeaway pic.twitter.com/5EbAcGRsCN

In many areas, the reconfinement has darkened the morale of the troops, little spared either on the weather side. “We accumulate a little. Last year it was hail and drought. This year, it is also a somewhat complicated vintage. With the drought, the vines suffered and lacked water, ”adds Julien Bertrand, whose family estate has existed since the 1950s in Charentay. On this farm, where wines, white Beaujolais village and primeur are produced, the harvest was limited. “It’s a very small harvest, equivalent to 2019. We start with very low stocks. But it’s a very nice harvest in terms of quality, ”adds Dominique Piron, anxious that the release of the primeur and the end of the year celebrations will be beneficial for sales.

“We have less wine but everything that has been bottled, we want to sell it”, underlines the president of Inter Beaujolais. To promote the work of winegrowers and support them during this unprecedented crisis, the organization has stepped up promotional campaigns, particularly on social networks. Despite the health restrictions, multiple events are planned over the next few days. At the Bertrand estate, Julien, who took over the family farm with the support of his parents, who are active retirees, offers tasting baskets with, to accompany the primeur, sausages, bacon in the gene (grape marc) and oysters from the Cotentin. “Over three days, Friday, Saturday and Sunday, we have 180 baskets ordered by our customers and many residents of Charentay. They really played the game to support us, ”rejoices Julien, who remains combative despite the context.

In 2020, his estate saw its sales drop by 40%. “We sell in a short circuit. Our clientele, restaurant owners and wine merchants in particular, have reduced or stopped activity. We also do a lot of fairs that couldn’t take place. So obviously, all of our niches have been impacted, he says. But we are not the most to be pitied because we were able to continue working ”.

“In Beaujolais Nouveau, we are 25% lower in sales. Those who work in a short circuit, with salons and small cellars, have more difficulty than those who have a more organized distribution system, with wholesalers, for export or with mass distribution, ”explains Dominique Piron.

“But we believe in it, we hang on, we stay motivated and we do everything we can to withstand the shock,” adds Julien. A leitmotif in the vineyard, where drive-through sales, home deliveries and reception in the estates are organized until Sunday evening. Among the many opportunities to taste the primeur, listed on the site Les Rendez-vous Beaujolais, Caroline and François D’Haene, owners of the Germain estate in Saint-Julien, have opted for originality. Renowned ultratrailer, this winemaker decided to get on his bike to deliver his bottles in the region, in Grenoble, Lyon on Wednesday and Gap on Saturday. At the Ouilly estate, in Arnas, a drive also allows you to collect baskets, with or without an appointment, and free deliveries are possible around the estate.

In Belleville-en-Beaujolais, Quincié-en-Beaujoalis and Dracé, traders, whose shops remained open during the confinement, have stepped in to support local producers. A dozen stores showcase wines from surrounding estates. Ideas for making Beaujolais Nouveau at home and perpetuating – a little – the tradition.

“It sure takes away from the conviviality. Beaujolais Nouveau is par excellence a wine for celebration and sharing. Usually, there are 140 of us in the cellar for the release of the primeur, with everyone at the tables and playing music. But we have to adapt, believes Julien. I just hope we don’t have to do it again next year… ”