Despite the Covid-19, Airbnb is a hit for its IPO 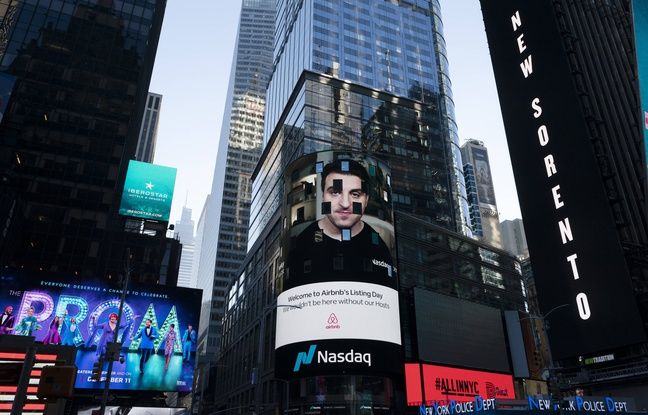 Airbnb breaks the house. The rental housing platform, which has shaken up the tourism industry, was a resounding success on the occasion of an exuberant first listing on Wall Street on Thursday. Its stock closed at $ 144.71 on the Nasdaq stock exchange, up 113% from its IPO price. At this level, including the securities granted to employees, Airbnb is valued at around $ 100 billion on the stock market according to Bloomberg.

The spread of the pandemic in the United States in the spring had marked a halt for companies wishing to rub shoulders with the markets. But stock market life has since picked up and investors are showing a voracious appetite for the new arrivals. On Wednesday, the door-to-door grocery and meal delivery boy DoorDash had already stormed Wall Street, soaring 86%.

Bigger than Hilton and Marriott combined

The level of the share, which trades under the symbol “ABNB”, continued to explode Thursday morning as brokers and bankers tried to assess investor interest as accurately as possible, to finally start the listing at 146 dollars. For the occasion, the Nasdaq displayed the platform’s logo and images of its activity on its facade overlooking the mythical Times Square in New York. After the charges were deducted, the company recovered $ 3.4 billion in new money from the transaction. At $ 100 billion, Airbnb’s market capitalization exceeds that of the Hilton, Marriott and Hyatt hotels combined.

‘Rise of a giant’

Founded 13 years ago in San Francisco, the company has revolutionized the business travel and tourism industry. Brian Chesky and Joe Gebbia were looking in 2007 for a way to pay their rent and then created a site, called AirBedandBreakfast.com, to offer conference participants to accommodate them on air mattresses.

The two friends were joined in 2008 by computer scientist Nathan Blecharczyk and officially formed Airbnb. As a serious financial crisis spreads around the world, the idea of ​​finding cheaper temporary accommodation, or of making a little money by renting a room, quickly wowed the public.

The rental platform has encountered resistance along the way, several municipalities and hoteliers worrying about seeing private housing turn de facto into hotels, depriving individuals of homes, promoting real estate speculation and creating a shortfall for the traditional hotel sector. But the group now has four million hosts on its counter and more than 825 million customers.