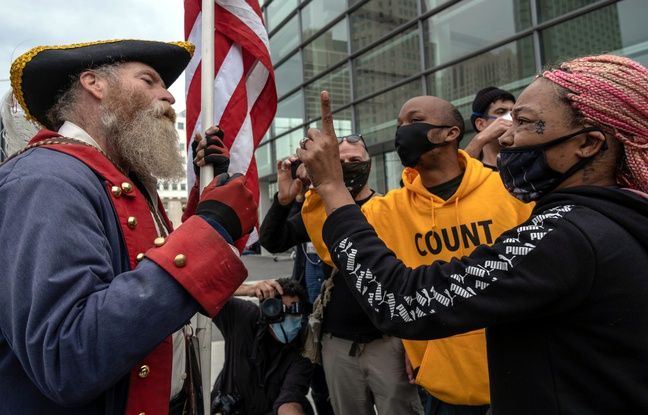 This is the new angle of attack of the Trump camp to denounce the “theft” of the American presidential election: the Dominion electoral software would have, according to him, erased or reassigned to his rival millions of votes intended for the president. What do we know? 20 Minutes make the point.

Dominion Voting Systems is a Canadian company founded in 2003 with US headquarters in Denver, Colorado. Specializing in electoral technology, it supplies local authorities with the machines and associated software that many Americans use to vote.

According to a study by the Wharton School of Business at the University of Pennsylvania, its technology reached more than 71 million American voters in 2016, in a total of 1,635 communities. This makes it the second largest supplier in the country, behind the company Election Systems & Software.

Why are we talking about this?

Donald Trump relayed in a tweet Thursday, in capital letters, information from the conservative One America News Network (OANN) according to which the Dominion software had “erased 2.7 million Trump votes across the country”, and that hundreds of thousands of votes intended for him had been reallocated to Joe Biden in states using Dominion technology.

Her close guard has since relied on this “information” to attest to the large-scale electoral fraud that she denounces without concrete evidence to support it. Starting with the president’s personal lawyer, Rudy Giuliani, who said Sunday on another conservative channel, Fox News, that Dominion was “a business of the radical left.”

“A foreign company, which has very close links with Venezuela, and therefore China, and uses software from a Venezuelan company that has been used to steal elections in other countries,” he said. other accusations with conspiratorial accents.

OANN did not publish online its report on Dominion which Donald Trump echoed Thursday on Twitter. The channel’s manager said in an email to CNN that it would feature in a large-scale investigation scheduled to air on November 21 and 22, without specifying what evidence it was relying on.

Dominion Voting Systems defended itself in a press release against any failure of its software. It evokes “human errors” in the processing of data from “certain counties”, including Michigan, but ensures that these isolated incidents were quickly resolved.

Several local and national electoral authorities, including the cybersecurity and infrastructure security agency (CISA), which depends on the Ministry of Internal Security, also ruled out on Thursday the possibility of manipulation of votes on machines.

“There is no evidence of an electoral system having erased, lost or changed votes, or having been hacked in any way,” they said in a joint statement. “The November 3 election was the safest in the history of the United States.”