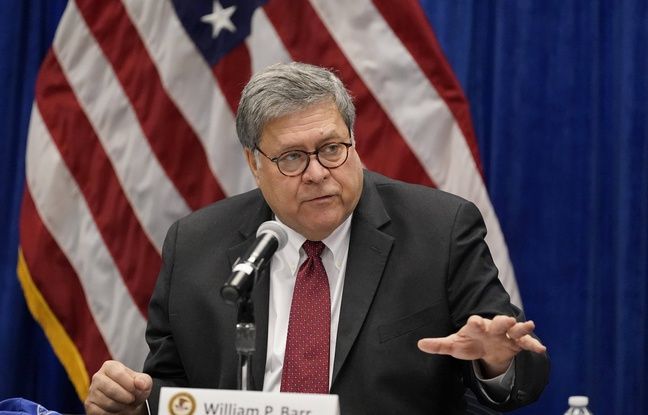 He escaped the dismissal announced on Twitter. On Monday, as the electoral college confirmed Joe Biden’s victory, Donald Trump announced the upcoming departure of his justice minister Bill Barr, publishing his letter of resignation. Faithful to the US president, Barr has refused to follow him on his post-election crusade, saying last week that the Justice Department had found, at this point, “no evidence of massive fraud”.

“Bill will leave just before Christmas to spend the holidays with his family, Deputy Justice Minister Jeff Rosen, an incredible person, will provide the interim,” Donald Trump tweeted, without repeating his accusations. The minister will leave a month before the democratic president-elect takes office on January 20.

The announcement of his departure coincides with the confirmation of Joe Biden’s victory by the American voters, which makes it almost final. Donald Trump persists in denouncing massive fraud and refuses to acknowledge his defeat. But his camp has never managed to provide any evidence to support these accusations and the dozens of legal appeals he has presented have been almost all rejected, including by the Supreme Court.

The Republican president has repeatedly deplored the inaction on this ground of Bill Barr, yet one of his most faithful ministers. However, the latter isolated Donald Trump a little more by asserting, in early December, that he had not observed any “fraud on a scale likely to change the result of the election”.

In recent days, the former real estate mogul has also described as “a big disappointment” the fact that the Minister of Justice did not reveal before the November election the existence of an investigation into the situation. tax of Joe Biden’s son, Hunter.

Donald Trump said he had Monday “a very nice meeting” with Bill Barr at the White House. “Our relationship is excellent, he did a magnificent job,” he said. In his resignation letter, tweeted by the president, the resigning minister praised the latter’s record and his “unprecedented success” in all areas.

He emphasizes having kept Donald Trump informed of the Justice Department’s investigation into “allegations of election fraud”. “At a time of deep divisions in the country, all levels of the state” must “do everything to ensure the integrity of the elections and promote the confidence of voters in their results,” he said. “Barr resigned of his own free will. He was not pushed or forced to resign, “assured a senior American official, referring to a” friendly “interview with the president.