Donald Trump back on Facebook? What to know before the decision of the supervisory board 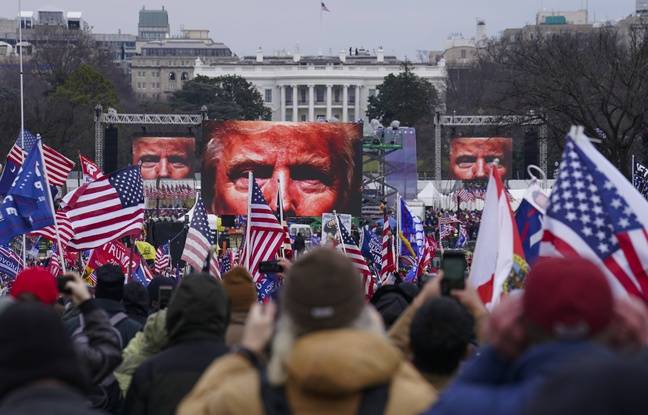 From our correspondent in Los Angeles

This is a particularly awaited decision. Suspended indefinitely from Facebook and Instagram following the attack on the Capitol on January 6 for violating the company’s charter, Donald Trump will be set on his fate this Wednesday. Facebook’s supervisory board, responsible for playing the arbitrators on moderation, must deliver its verdict at 9 a.m. (3 p.m. in Paris). Return to the name of freedom of expression or confirmed eviction?

Obviously divisive, the decision should resonate well beyond Facebook, while the Gafa do not know what to do with Donald Trump. In the meantime, the person, who has struggled to be heard in recent months, launched a blog on Tuesday evening. His adviser Jason Miller, however, assured that it was “not a new platform”, promising information on this front in the “near future”.

Why was Donald Trump suspended?

On January 6, as his supporters storm the Washington Capitol during the certification of the election results by Congress, Donald Trump posted a video asking them to return home in peace. But the American president assures him at the same time: “We have been stolen the election”. Already warned, Donald Trump is suspended for 24 hours by Facebook, which considers that this video violates its conditions of use and “increases the risk of violence”. The next day, Facebook considers the threat “too great” and extends the exile to two weeks. Then suspends the former president “until further notice”, asking his supervisory board to take up the case at the end of January.

Who are the members of the supervisory board?

It is an entity of 20 sages. The four co-chairs, which include former Danish prime minister Helle Thorning-Schmidt and a former conservative US judge, were chosen by Facebook last year. They then recruited the other members in consultation with the network. More than half have a legal background (judges, lawyers and law professors). Among the others, we find in particular the Yemeni laureate of the Nobel Peace Prize, Kolkata Abdel-Salam Karman, the director of the NGO Internet Without Borders, Julie Owono, and Alan Rusbridger, former editor-in-chief of the British daily The Guardian.

How does the instance work?

It is supposed to operate independently. Facebook is funding it to the tune of $ 130 million, and this budget is placed in an irrevocable trust. Mark Zuckerberg cannot oust one of the members and the decisions of the board are binding. Clearly, Facebook does not have the last word and must implement any decision of its Supreme Court within seven days.

How is a decision made?

The supervisory board can be contacted by a user or by Facebook. If the body takes up a file, it appoints five members responsible for examining it, including one from the region concerned (for Donald Trump, North America). This panel then submits a recommendation on which the full board votes. It only takes a simple majority to adopt or reject it. The board can also submit suggestions to Facebook on changes to its charter or moderation criteria.

Which way will the scales tip?

Tuesday evening, nothing had filtered. In its first five decisions, the board disowned Facebook four times by forcing the network to restore deleted posts, including a post in a French group devoted to Covid-19 which claimed that hydroxychloroquine could save lives. But no decision concerned a user as influential as Donald Trump.

The former president continues to question the results of the election, speaking in particular of “rigged ballot” in front of guests in Mar-a-lago last weekend. Finally, Facebook is not subject to the First Amendment of the US Constitution on freedom of expression: the latter applies to the government, but not to private companies. Despite everything, many political figures, like Angela Merkel, have expressed their concern after Donald Trump’s suspension by Facebook and Twitter. With a question as complex as it is crucial: can censorship be the answer to disinformation?