Donald Trump opens the door to defeat for the first time 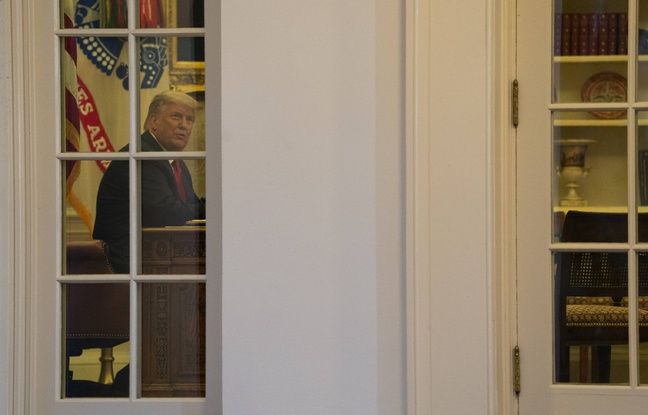 “Time will tell”: Donald Trump opened the door to a defeat against Joe Biden on Friday, reinforced by the announcement, ten days later, of the latest presidential results. The outgoing president, for his first public speech for more than a week, has indeed raised the possibility of an electoral setback in a commentary on the resurgence of the Covid-19 pandemic in the United States.

“I think time will tell which administration we have, but whatever happens in the future, who knows, I can tell you that this administration will not impose lockdown,” said the outgoing president, a lot less categorical than in his tweets denouncing at will a “rigged” election.

The same morning, Donald Trump had indeed again claimed to be the winner of the presidential election. “A rigged election! ”
he tweeted, continuing to question the results, an unprecedented fact in American political history. And supporters of the president, a tide of red caps “Make America Great Again” with whom he has continued to surround himself in the last hours of his campaign, continue to be bombarded with requests for financial participation to “defend the election ”in court.

Some of the more radical among them are scheduled to demonstrate this Saturday in Washington, even though the Trump camp is unable to produce a single concrete piece of evidence proving the existence of large-scale electoral fraud. And, as in a parallel reality, the ministers and most loyal advisers to the outgoing president also ensure that the ground is being prepared for “a second Trump term”.

On Friday, during his speech, Donald Trump did not speak more about the presidential election. He concluded his speech, in the gardens of the White House, without answering journalists’ questions, an exercise to which he nevertheless lent himself very regularly during his mandate.

Still, the last results of the November 3 ballot had finally fallen, a few hours before, after ten days of waiting. According to projections by the mainstream American media, Georgia went to Joe Biden and North Carolina to Donald Trump. Ironically, the Democrat ultimately won 306 voters, against 232 for the outgoing president. Or the reverse score of the Republican billionaire’s victory [qui avait alors parlé d’un « raz-de-marée »] facing Hillary Clinton in 2016.

A recount of the votes must take place in Georgia, where the gap is very small between the two candidates, but its outcome will not change the final result: Joe Biden has, whatever happens in this state, the 270 necessary voters to open the doors of the White House.