Ecological and economical, the swap of clothes joins the trend of thrift stores 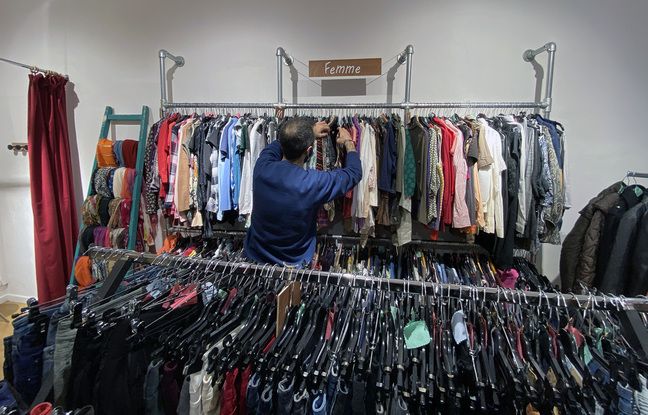 With the extended fortnightly sales, it’s time to do business… in business. Even if at the Simone Club, we talk more about “rebel sales”. In this rather special store, there is nothing to sell except “a new state of mind to consume differently”. “Here, it’s the clothing that acts as a bargaining chip. We privilege the blow of heart rather than the monetary value ”, specifies Joël De Zerbi, co-manager with his partner Elsa Duval of the shop in the center of Nice.

White walls, tidy wardrobes and space to move around. “It’s a store that seems classic but where second hand is offered,” says the owner. We wanted to change the way we see thrift stores, where there is business everywhere ”. In Nice alone, nearly fifteen of this type of store have emerged in recent years. The couple stand out and “dust off this image” where clients “may feel oppressed”. However, in three and a half months, their stock has increased from 1,600 to 4,500 pieces.

Four subscriptions are available: daily (18 euros), monthly (22 euros), quarterly (60 euros) or year (180 euros). Depending on the clothes brought back, in very good condition and in season, points are accumulated. “A jacket is worth three credits, a T-shirt is one credit,” says the co-founder. Then, we have as much time as our subscription allows to spend the pot.

The idea comes from Canada where the couple adhered to this concept. “We didn’t have a lot of stuff and we went through the four seasons without ever getting tired of what we wore while having an ecological consumption”.

This is exactly what Laurène Dumas thinks, member since October, who took “directly a subscription to the year”. For her, “it’s as if I had an unlimited closet and I was shopping endlessly for 15 euros per month”.

The Simone Club offers “all styles, from vintage to very recent”. “There are those who come for the ecological side, those for the financial aspect, those who come because they like to hunt. Or all of these reasons at once. We are often told that we have the impression of having twenty stores in one, ”smiles Joël De Zerbi. “There is even a baby / children section, which parents like a lot because it is in those years that we need this concept the most,” adds Elsa Duval.

“There is an awareness”

The current health situation is not an obstacle, on the contrary. “On our side, we respect a strict cleaning protocol. On the side of our customers, we see that there is an awareness of a new way of consuming with a wallet which, sometimes, has taken a big hit, ”analyzes the co-manager.

Beyond the sales spirit, the Simone Club bears her name so that “the feeling of belonging to a community”, indicates the co-founder. When possible, the store will also be a meeting place. In the meantime, it is possible to participate in sewing and embroidery workshops.