Hairdressers “overwhelmed” for their last day of opening 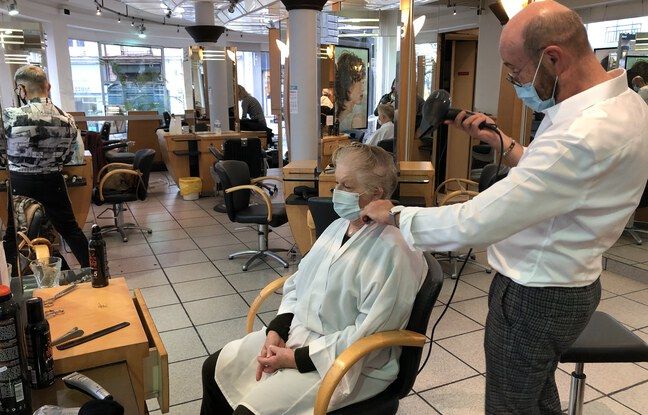 “The phone just keeps ringing. The same speech everywhere. While the national reconfinement will take effect this Thursday at midnight throughout the territory, the hairdressers of Nantes are overwhelmed by the appointments.

At the Joaquim Coiffure salon, rue Jean-Jacques Rousseau, customers are pampered one last time while others wait at the entrance. “We had to refuse forty appointments for today,” says Bruno, a hairdresser for the brand. We are clearly overwhelmed, it does not stop. So, we’re going to have a nocturnal and finish at 9 p.m. “While styling Dany, a regular, he adds:” Frankly they could have waited two more days and closed on Saturday. Like many other so-called non-essential businesses, hairdressers will be forced to close their doors this evening and for the duration of the confinement.

“We can’t take everyone”

A little further down the street, the same goes for Thierry Coiffure. Janie is a little upset because of the Wednesday night announcements. “We do whatever it takes and here we are again forced to close,” said the owner, with a disillusioned air. We had to do work at the show on November 11, unfortunately it will not be possible. I am convinced that we will not be open on December 1st. I don’t really expect much anymore. “

To manage the situation as well as possible, it admits to being open from 7 am this morning and until 11 pm this evening. “We can’t even take everyone. As the phone starts ringing again, Remy, who works in a bar next door, walks through the door. “I come to have my hair cut because of the confinement, for sure, but also because they are friends,” says the young man. We are neighbors all year round so we can come and give a little help! I find that normal. “

The exceptional attendance is confirmed in all the salons surveyed. Because this time, there is no question for the confined to play the apprentice hairdressers. “We try to keep everyone up, but it’s complicated, admits Florian at CL Coiffure. People really come for everything: cuts, brushing, colors… It’s going to be a big day. “

Rue Racine, at the Talking Salon, it will end at 10 pm, and “too bad if it’s dark”. Laurent tries to cope but regrets having been taken aback. “Frankly, it’s lamentable. Even for the clientele honestly this is not correct, he says. We would have been warned eight days ago, we could have prepared but there … “

Electricity price: Suppliers will pay 40% of the cost of the cap tariff

According to the Ministry of Economy, with rising energy...
Economy

Wall Street opens in red and the Dow Jones falls 0.26%

Wall Street opened in the red on Friday and...
Economy

This statement had the effect of an exploding bomb...