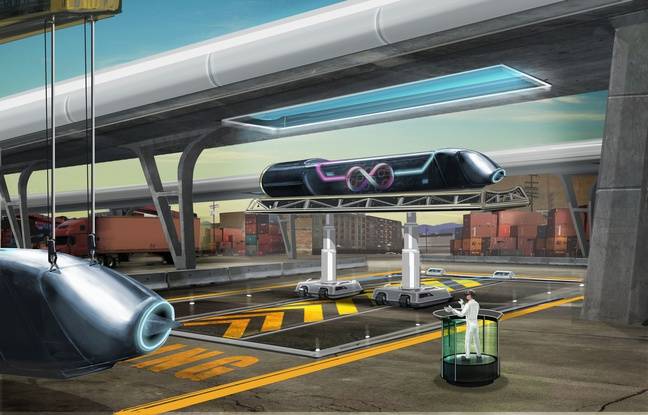 Getting passengers to travel at high speed on trains already exists in several countries. Hyperloop TT (Hyperloop Transportation Technologies) innovates by offering a dedicated freight train capable of running at 600 km / h. The American company made the presentation of this revolutionary concept at the beginning of this month of July reports Futura-Sciences. According to the company, which has already developed a passenger train reaching more than 1,000 km / h, its project will make it possible to bring to the transport of goods “a speed equivalent to that of the plane, but at the cost of the train. “.

Called HyperPort, this project will deliver 2,800 containers per day. The goods will be delivered “in a few minutes instead of several hours”, emphasizes Hyperloop TT. In addition, the HyperPort’s carbon footprint is zero. The idea is less to compete with the train than with maritime transport, by moving “the ports inland”.

Free yourself from maritime transport

“Using the same technology as our passenger systems, HyperPort secures supply chains and frees up seaside space that would otherwise be used for shipping ports,” explains Andres De Leon, CEO of HyperloopTT. Advantage of the HyperPort over maritime transport? As with passenger transport, freight is carried out via a closed tube under low pressure, so climatic hazards cannot delay the convoy. There is also no train crossing and we avoid the delicate pollution of the seaside in the event of an accident.

Hyperloop TT is not the only company to present its project. The companies TransPod and Virgin Hyperloop have also advanced on the subject. The last one even carried out a test with two passengers on board over a length of 500 meters in North Las Vegas in Nevada (United States), reports Futura-Sciences. The company stands ready to go into commercialization in 2027.

Hyperloop TT is not there yet. The American company only has a 320-meter test tunnel near Toulouse. Another one kilometer is slow to see the light of day. This project will be presented in virtual reality in Hamburg next October at the World Congress on Intelligent Transport Systems (ITS).

Dialogue, intensity, “pleasure” … Julien Stéphan has put his foot down in the Alsatian club