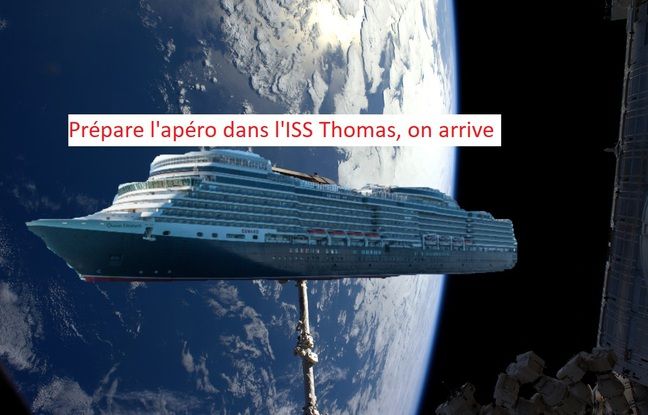 Space flight, the future in fashion? After their little media escapades over the Earth, billionaires Richard Branson (Virgin) and Jeff Bezos (Amazon) intend to grow their new hobby by attracting space tourists. Ultimately, Virgin Galactic plans no less than 400 flights per year to take its customers to an altitude of 80 km and allow them to enjoy a beautiful view for a few minutes. For its part, Blue Origin, founded by Jeff Bezos, will propel one-day astronauts 100 km above the ground during its next “missions”.

There is no shortage of candidates. At Virgin, 600 people have already reserved their place for several years. And 1,000 more are on a waiting list. At Blue Origin, 7,600 people took part in the auction to try and land a seat next to Jeff Bezos. ” Requirement [pour les vols] is very strong ”, also assured the billionaire last Tuesday, during a press conference.

“It will never be accessible to the greatest number”

Ah yes, we may have forgotten to tell you about a very small detail. To get on the Virgin Galactic ship, the basic ticket is 211,000 euros, all for a flight of ten minutes. And at Blue Origin, the winner of the auction paid 24 million euros to get laid with the double of François Lenglet. As for the private orbital flight planned by SpaceX in the fall of 2021, it was financed by a billionaire, its cost (confidential) being of the order of several tens of millions of euros.

This is perhaps why Pierre Lionnet, economist and research director at Eurospace, an association which defends the interests of industrialists in the space sector, is very skeptical of “mass” space tourism: “There are limits strong techniques which mean that it will never be accessible to as many people as possible. For each flight, you have to pay technicians, highly qualified engineers, you have verification procedures that take several days before takeoff… ”. All of this represents irreducible costs, not to mention, of course, the enormous upfront expenses to develop the rockets or the ships.

Cheaper, is it possible?

If these flights are reserved for the ultra-rich, other innovations could allow greater access to the thrill of space. Thus, Elon Musk’s “Earth to Earth” program aims to link the main cities of the world in less than 45 minutes, thanks to the Starship rocket. A sort of RER at very high altitude. After several failures, a prototype finally made a successful takeoff and landing last May, and SpaceX’s whimsical CEO is planning the first test flights in 2022 or 2023.

“The rocket will have a carrying capacity of 100 tonnes, we can very well imagine that 50 people could climb in at the same time,” explains Pierre Lionnet. According to Elon Musk, the total cost of a theft could ultimately be less than $ 2 million (1.7 million euros) ”. Divided by 50 passengers, the ticket price would then be 40,000 euros. An obviously enormous sum for a very large part of the population, but which would approach the “Première” tariffs currently practiced by plane, which can go up to 20,000 euros.

If these space projects can make you dream, they pose a very down to earth problem. Each flight requires an enormous amount of fuel, with obvious pollution as a result. In an article by The Conversation published last year, several French scientists recalled that a Virgin Galactic flight by Richard Branson represented around 4.5 tonnes of CO2 per passenger. “For a few minutes of weightlessness, that’s more than twice the individual broadcast annual (“CO2 budget”) allowing, according to the IPCC, to respect the objective (+ 2 ° C) of the Paris Agreement ”they wrote. As for Jeff Bezos’ Blue Origin, it uses hydrogen, often made from hydrocarbons.

The scientists’ judgment is therefore severe: “after their private yachts and their business planes, the space whims of these (ultra) rich maintain the illusion of omnipotence at the origin of the serious disturbances of the terrestrial biosphere”.

A “whim” also criticized by Pierre Lionnet. “These manned flights, these flea jumps in space, are not so modern. If you take Virgin Galactic or Blue Origin, they are doing nothing more than what the US space program (Mercury) was already doing in the 1960s. So when it comes to technical advancements, I’m confused ”.

For the economist, “these trips are sold as a unique and expensive experience, which does not require any effort. You have a whole staging, with the outfits, and a ceremony when you return to Earth. It is a new social marker. The proof is that Richard Branson and Jeff Bezos assure that their clients are now astronauts ”. But reality could catch up with these billionaires with their heads in the stars: a few days ago, the US Federal Aviation Agency (FAA) clarified the qualifications required to be a true astronaut.

In particular, the person must have performed “activities during flight essential to the safety of the public or contributed to the safety of space flights”. Criteria to which only pilots or people performing tasks during the flight can claim, and not mere passengers. Jeff Bezos therefore only has to open a NASA manual before his next attempt.

Google TV could soon offer free channels on its interface