But when can bars and restaurants really reopen? 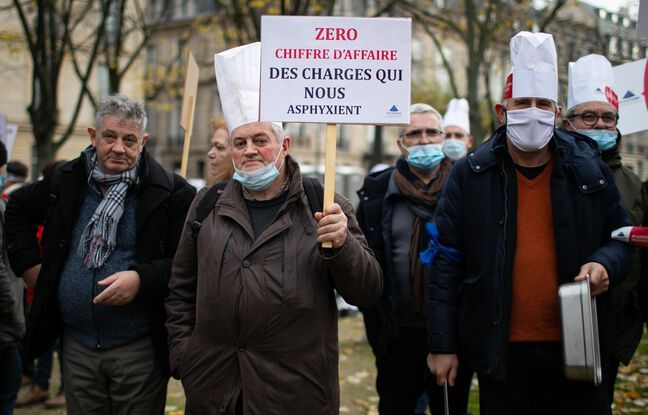 Already forced to remain closed during the end of the year celebrations, restaurateurs and cafetiers have surely taken another blow to morale this morning. Guest from Europe 1 on Tuesday, Prime Minister Jean Castex explained that he could not “guarantee” the reopening of establishments on January 20. A remark similar to that made by the Minister of the Economy Bruno Le Maire, interviewed Monday on France Info: “I cannot tell you with certainty that we will reopen the bars and restaurants on January 20”.

The executive prefers to leave time to see if the Christmas period will not lead to a rebound in contaminations. “It will depend on how we spent the holiday season, which I have already said could be conducive to accelerated traffic [du coronavirus] »Indicated Jean Castex. For restaurateurs, closed since the end of October, and who demonstrated this Monday in Paris, it is in any case only a half-surprise.

Reopening shortly after Valentine’s Day … or not

“The government made us feel from the start of the reconfinement that the reopening date was not certain. It was an open secret ”, assures Jean Terlon, vice-president of Umih-Restauration, one of the unions which represents the managers of cafes and restaurants. So when will establishments be able to welcome clients again? “At a minimum, I think it will be after Valentine’s Day [le 14 février], to avoid massive groupings in restaurants, advance Jean Terlon. But everything will depend on the health situation after Christmas ”.

The executive has indeed its eyes riveted on hospital indicators and the number of contaminations. However, for several days, the number of daily hospitalizations of coronavirus patients stabilizes around 1.200 and no longer decreases. At the time of the first deconfinement in May, it was half less (about 500 hospitalizations per day), with a downward trend. If these figures are important for the government, it is because the times when we eat are also those when we can most easily contaminate ourselves due to the absence of a mask.

This is notably what the Scientific Council ensures in its latest note dated December 12. “The ComCor study conducted in France [et non-publiée à cette date] last October-November on the scene and the circumstances of the new contaminations shows the high risk of transmission of the virus during meals, whether they take place in private (family, friendly) or public (cafes, restaurants …) ”specifies the document.

Despite the denials of restaurateurs – “the government cannot justify the closure of restaurants by studies” assures in particular Jean Terlon -, the executive considers that it has sufficient scientific evidence. Seized in summary proceedings by the Umih in order to suspend the closure of cafes and restaurants, the Council of State also rejected this request and validated the government’s reasoning on December 8.

The Council of State drives the point home

“It is (…) not disputed that the contamination with Covid-19 occurs mainly by respiratory droplets, by contact and by airborne route and that a distance of one meter is not sufficient by itself to limit the contagion in closed spaces ”recalls the Council of State, which quotes the famous study published on November 10 in the review Nature which highlights the role of bars and restaurants in the chains of contamination in the United States.

“If the applicants [les restaurateurs] argue that the French situation is different, due to the existence of health protocols as well as consumption and travel habits different from those of American consumers, it does not follow from the instruction that the conclusions of this study, based on the study of the attendance rate and the time spent in each place of mixing of the population (…) cannot be validly taken into account by the public authorities to assess the risk ”indicates the order of the Council of State, which ensures moreover, that the Ministry of Health produced other studies with similar conclusions.

In summary, bars and restaurants may remain closed as long as the health risk is deemed too high by the government. “Logically, to be able to reopen them, we should wait to have controlled the epidemic, argues epidemiologist Catherine Hill. However, we never really succeeded from the start ”. She continues: “As soon as the cafes and restaurants are going to reopen, you are going to have people who are going to crowd inside, and obviously the virus will circulate. To control the epidemic, the population must be massively screened or vaccinated. And for the moment we do not know how long it will take to achieve sufficient vaccination coverage ”.

The other option, that of massive screening, also seems difficult to set up, as we mentioned in an article at the end of October. “To screen the entire population in two weeks, 35 million tests would have to be done per week, which is 17 times more than what is currently being done. However, we are at the maximum of our capacities ”, assured for example Stéphanie Haïm-Boukobza, person in charge of the pole infectiology of a laboratory and member of the Union of the young medical biologists (SJBM). “We have the means to do a real massive screening, certainly at the cost of a major effort but we can get there”, replies Catherine Hill.

In view of the weaknesses of these two strategies (screening and vaccination), a new wave of coronavirus in 2021 – “we are going to have one”, assures Catherine Hill – would therefore delay the reopening of cafes and restaurants even further.

Paradoxically, they are not in such a hurry to receive customers at the table in the current context. “Open under improved sanitary conditions, that is to say with fewer customers in the dining room, it is inevitably less turnover that comes in, argues Jean Terlon. Moreover, if you reopen, you have wages to pay, since there is no longer partial unemployment, not to mention a potential curfew that reduces service time. Reopening is economically dangerous ”. In short, “we did not leave the inn,” says Jean Terlon, fatalist. We are especially not ready to go there to enjoy a good meal.

Share
Facebook
Twitter
Pinterest
WhatsApp
Previous articleBetween 65 and 85 years old, aging at home costs on average between 584 and 1,836 euros, according to a study
Next articleA period of three months between registration and the first appointment, according to a study

Accused of orchestrating his own “murder”, a lawyer surrenders to the police

The Liberals given the winners of the legislative elections, Justin Trudeau on his way to a third term