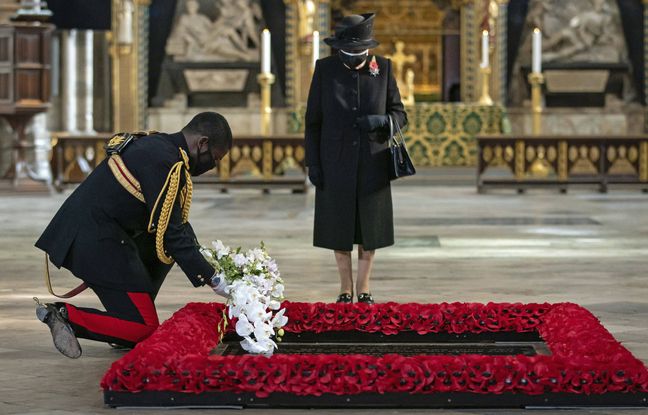 Queen Elisabeth II visited the Tomb of the Unknown Soldier, located in Westminster Abbey in London, last week. She left a bouquet there to celebrate the return, one hundred years ago, of this unknown soldier who died in the First World War.

Composed of orchids and myrtle, the bouquet was inspired by the one that the Queen, now aged 94, wore to her wedding, an official statement said on Saturday. The monarch has thus taken up the tradition established by her mother, who had placed her own bouquet on the tomb of the Unknown Soldier during her marriage in 1923, in homage to her brother killed in the war.

The British pay homage from their front steps

Due to the coronavirus crisis, commemorations to honor British soldiers who died in the Great War have been reduced this year. The tributes of the “Remembrance Sunday”, which takes place every second Sunday in November, and the armistice, on November 11, were done quietly.

This Sunday, the ceremony of laying wreaths of flowers at the Cenotaph took place without an audience or a parade of veterans, but in the presence of Prince Charles, who has been attending in place of his mother since 2017. The heir has also attended the traditional Royal Albert Hall concert, pre-recorded and broadcast Saturday night on the BBC.

Since Thursday, England has been confined again, complicating fundraising for veterans. To pay homage to them all the same, the Royal British Legion encouraged the British to observe this Sunday two minutes of silence on their steps, as well as to adorn their windows with poppies, flowers that have become symbols of the memory of this war.