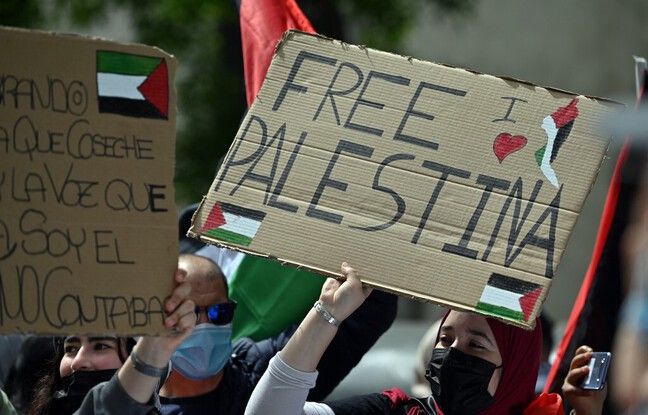 About 2,500 people in Madrid, several thousand in central London. Demonstrations took place this Saturday in several European countries, in peace, in support of the Palestinian cause, against a backdrop of military escalation between Hamas and Israel.

“The silence of some is the suffering of others”, “Jerusalem, the eternal capital of Palestine”, could be read on the banners and placards brandished by the demonstrators in the Spanish capital, including a large number of young women. “It’s not a war, it’s genocide! », They chanted as they came up from Atocha station to Place de Sol. Many young people were wrapped in Palestinian flags.

“They are killing us”

“They are killing us. We are in a situation in which the Naqba (the “catastrophe” in Arabic) continues into the 21st century, “said Amira Cheikh-Ali, 37, daughter of Palestinian refugees, referring to the term used to refer to the exodus. Palestinians after the creation of the State of Israel in May 1948.

“We want to ask Spain and the European authorities not to collaborate with Israel, because they collaborate by their silence” on the violence in progress in the Middle East, explained for his part Ikhlass Abousiane, 25, nurse of Moroccan origin like many participants in the event.

Calls to “liberate” the Palestinian territories

In London, protesters called on the British government to intervene to stop the Israeli military operation. Protesters gathered at midday at Marble Arch, next to Hyde Park, from where they walked towards the Israeli Embassy, ​​across the park, waving Palestinian flags and placards calling for the “liberation” of the Palestinian territories.

“It is essential that the British government take immediate action,” said the organizers, including the Stop the War coalition, the UK Muslim association, the Palestine Solidarity Campaign and the Campaign for Nuclear Disarmament.

“He must no longer allow the brutal violence against the Palestinian people and their oppression by Israel to go unpunished,” they added, denouncing the strikes that killed civilians in Gaza as “war crimes”. “The British government is complicit in these acts as long as it offers military, diplomatic and financial support to Israel,” the organizers also said.

Despite intensified diplomatic efforts to try to end the fighting between Israel and the Palestinian movement Hamas, the Israeli air force struck several sites in the Gaza Strip overnight from Friday to Saturday, while nearly 300 rockets were launched again from Gaza towards Israel, according to the army.