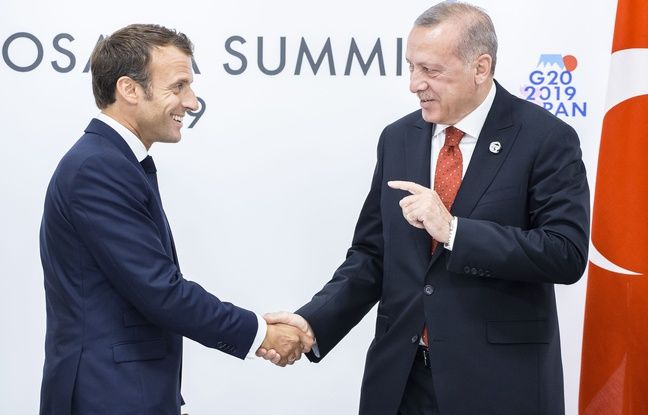 They will talk to each other again… a first since September. Emmanuel Macron will meet at 6 p.m. on Tuesday with Turkish President Recep Tayyip Erdogan by videoconference. The two leaders have planned to discuss in particular bilateral relations, regional issues and relations with the European Union, said the Elysee.

This interview takes place in a context of deep diplomatic disagreements between Turkey and France. The two countries are opposed on several issues such as Libya, Syria, the Eastern Mediterranean or the Paris offensive against Turkish influence on Islam in France.

The two men have had heated exchanges in the past, the Turkish president going so far as to question the “mental health” of his French counterpart, after Emmanuel Macron’s statements in defense of freedom of expression, including including the cartoons of Muhammad. His Turkish counterpart had called on his fellow citizens to boycott French products and accused the French president of “Islamophobia”. Paris had recalled its ambassador to Ankara for consultations. Even French teachers at the prestigious Galatasaray University in Istanbul have been caught up in the process, having recently been deprived of their work permits and threatened with expulsion at any time.

In addition, in December, European countries agreed to sanction Ankara for its unilateral gas drilling in the eastern Mediterranean. Turkey has also annoyed its Western partners by intervening in Libya to support the government in Tripoli and by supporting Azerbaijan in its armed conflict with Armenia in the Nagorno-Karabakh region.

But at the end of January, faced with the arrival of a new potentially hostile American president, the Turkish head of state changed his tone and hammered home that he wanted to “write a new page” in his relations with the EU. Ankara even extended an olive branch to Athens by inviting the Greek leaders to discussions on the exploitation of hydrocarbons in the Mediterranean.

Turkish efforts to ease tensions have apparently worked. At the beginning of February, Emmanuel Macron said he was “very happy” with the change in tone of his counterpart. “I now hope that we will obtain results” in Syria, by obtaining “the withdrawal of Turkish troops in Libya”, in Nagorny-Karabakh or by “lowering the tension”, had said the French president during a speech. videoconference with the Atlantic Council.