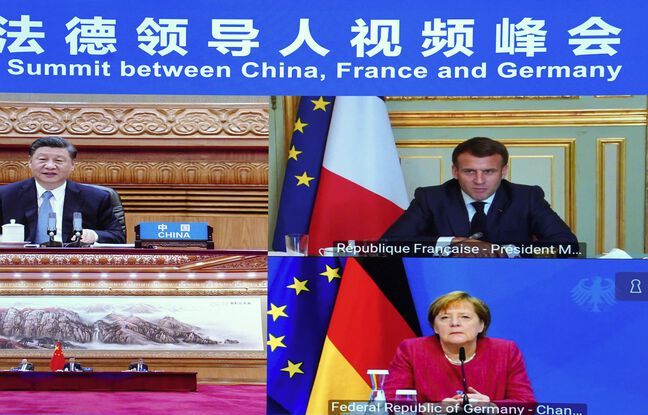 Climate, economic and health issues, as well as the restoration of air links were on the menu of discussions Monday between Emmanuel Macron, Angela Merkel and Xi Jinping. The French President, the German Chancellor and the Chinese President discussed by videoconference, the same format as during their previous meeting in mid-April.

According to the state press agency New china, the Chinese president pleaded for a relationship between large countries which is stable and balanced. “What China wants most is to develop rather than take the place of others,” Xi Jinping said.

Angela Merkel and Emmanuel Macron in particular demanded from China the end of the financing of coal-fired power stations and its support for the Coalition of high ambition for nature and peoples, for the protection of biodiversity, which aims to obtain an agreement on preservation of biodiversity. They also pleaded for Beijing to support their proposal to reallocate Special Drawing Rights from the International Monetary Fund (IMF) in favor of Africa, to the tune of $ 100 billion.

While the investment treaty between the EU and China was blocked by the European Parliament, the two European leaders also “recalled the European expectations on access to the Chinese market” of European companies with “competitive conditions fair ”, according to the French presidency. They also called for the reestablishment of air links. For France, links with China fell from more than 100 flights per week before the Covid-19 crisis, to six per week currently. They also once again “expressed their serious concerns about the human rights situation in China and reiterated their demands on the fight against forced labor.”

Victory against the coronavirus is not yet here

For his part, the Chinese leader stressed that the pandemic was not yet overcome and that the prospects for recovery remained uncertain, Chinese public television CCTV said. China in turn hoped that the European Union would provide Chinese companies with a fair and “non-discriminatory” environment.

Beijing also called for Europe to increase its support for Africa, stressing that it had provided vaccines to 40 countries, according to this source. In general, “we hope that the European side can play a more positive role in world affairs, show real strategic independence and at the same time protect world peace, stability, development and prosperity,” added the president. Chinese.