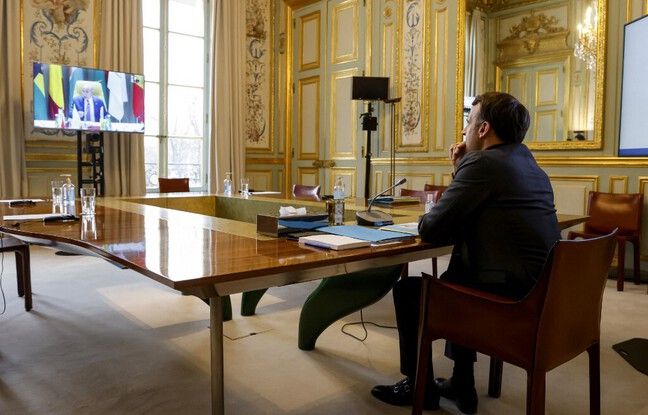 During the G5 Sahel summit in N’Djamena, French President Emmanuel Macron, by videoconference from Paris, insisted on Tuesday on the need to strengthen both the fight against jihadist groups affiliated with Al-Qaeda and the return of the State to the abandoned territories of the region. For its part, France does not intend to reduce “immediately” the strength of its anti-jihadist operation Barkhane, added the French president, considering that a massive withdrawal “would be a mistake”.

“We have succeeded in obtaining real results in the area of ​​the three borders”, between Mali, Niger and Burkina Faso, explained the Head of State, a year after the Pau summit (south-west of the France), adding that the main target group, the Islamic State in the Greater Sahara (EIGS), “has lost its grip and suffers many losses”.

But organizations affiliated with Al-Qaeda, the GSIM (Support Group for Islam and Muslims) and Katiba Macina, “whose highest hierarchy continues to nurture a jihadist agenda”, still pose a threat in the Sahel, said underlined Emmanuel Macron by promising “reinforced action” to “try to behead these organizations”. The Head of State also indicated that France did not intend to reduce “immediately” the strength of its anti-jihadist operation Barkhane in the Sahel, which currently mobilizes 5,100 soldiers. A massive withdrawal of French forces “would be a mistake”, he added.

“No doubt significant changes will be made to our military system in the Sahel in due course but they will not take place immediately,” he said, explaining that “it would be paradoxical to weaken our system at the time. where we have a political and military alignment favorable to the achievement of our objectives ”. Emmanuel Macron then welcomed the decision announced the day before by Chadian President Idriss Déby Itno to send 1,200 soldiers to this area of ​​the “three borders”. It is “a strong and courageous decision which will consolidate the strength of the G5 Sahel”, he commented.

In addition, “the international mobilization in favor of the Sahel has never been so powerful”, argued the Head of State, thanking the European countries participating in the new group of special forces Takuba, “who thus agree to mutualize the risk of the ultimate sacrifice that our soldiers take ”. Beyond the military component, the French president insisted on the need to “give a perspective to the populations of the Sahel”, calling for a “second leap: that of the return of security and services to the populations” and demanding ” an impetus at the highest level of the State ”to reinvest the neglected territories of the region. “It is through the collective and concrete action on the ground that we will succeed. France will continue to play its part because I know that everyone is mobilized here, ”he concluded.

The N’Djamena summit takes place a year after that of Pau, which, faced with the threat of a rupture under the blows of jihadists, had led to a military reinforcement in the zone of the “three borders” and the sending of 600 additional French soldiers, increasing them from 4,500 to 5,100. Despite the claimed tactical successes, the picture remains very bleak in Mali, Niger and Burkina Faso. More than eight years after the start of the crisis, hardly a day goes by without an armed attack, the explosion of an artisanal mine or atrocities against civilians. The bar of two million displaced persons was crossed in January.