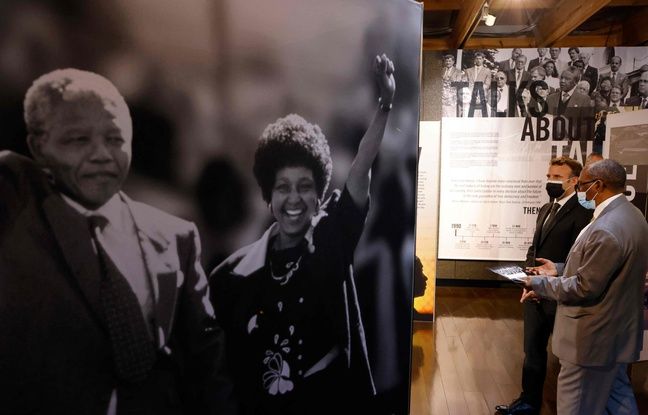 A “life of commitment, of sacrifices, of struggles”. On Saturday, French President Emmanuel Macron paid tribute to the first black South African president, during a visit to the Nelson Mandela Foundation in Johannesburg, before returning to France.

“It is important before leaving to pay homage and to immerse yourself in what has made the history of this country and its struggles”, declared the President of the Republic. Hero of the struggle against apartheid and Nobel Peace Prize winner, Nelson Mandela, a central figure of the twentieth century revered beyond the borders of Africa, tore his country from the racist apartheid regime. He died on December 5, 2013.

A visit to South Africa focused on the Covid-19

Passing in front of the old car of the icon of reconciliation, then visiting his office, the French president described a “moving” place. Referring to a South African democracy “facing many challenges but which is taking them up with a lot of courage”, Emmanuel Macron added: “It’s always good to remember where you come from”.

The French head of state concluded a two-day visit to South Africa on Saturday, focused on the fight against the coronavirus pandemic. Emmanuel Macron and his South African counterpart Cyril Ramaphosa agreed to assert that the patents on anti-Covid vaccines “should in no way be a brake” on the immunization of populations. The French president said he agreed to support a request for a temporary lifting of rights, even if the priority remains, according to him, the transfer of technology.

Speaking to the French community in South Africa on Saturday, he used the word “hapo” which, in the Khoisan language, means that dreams must be shared by the community to come true. “This word alone sums up this aspiration for South Africans to live together. Europe and Africa is what it is today: Hapo! “, He launched.