England to end lockdown on December 2 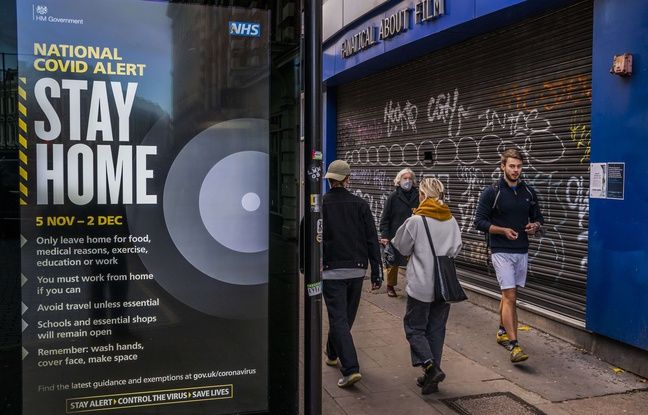 The English will be a little less constrained in their exits. Downing Street confirmed on Saturday that the four-week lockdown in England will not be extended beyond December 2. On that date, this British province will return to a system of local restrictions to limit the second wave of the coronavirus.

The official announcement will be made on Monday by Prime Minister Boris Johnson, the Prime Minister’s services said in a statement. The “three-level local restriction plan” will resume the same restriction levels as before the containment, but “more areas will be placed in a higher level in order to keep the virus under control” and “to preserve the gains of the containment “. It will be discussed in detail and approved on Sunday at a government meeting, then presented to parliament on Monday. “Ministers will announce Thursday under what level of restrictions each region will be placed,” according to Downing Street.

The plan unveiled Monday for England “will also set out how people will be able to see their loved ones at Christmas”, added the Prime Minister’s services, recalling that “the ministers have made it clear that it will not be a holiday period normal ”. “Recent positive developments in vaccines and mass testing give hope that the use of restrictions to fight the virus can be gradually reduced by the spring.”

In the United Kingdom, the most bereaved country in Europe with more than 54,600 deaths due to the coronavirus, each British province decides on its own strategy in the face of the health crisis. These can therefore go in opposite directions. This announcement of deconfinement in England thus comes the day after tightening restrictions in 11 areas of Scotland and the announcement of new confinement in Northern Ireland, which will last two weeks, until December 11.