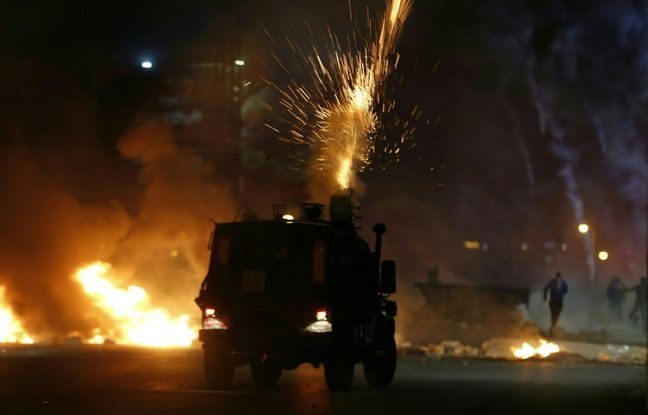 A deluge of fire on Gaza, a rain of rockets on Tel Aviv and a helpless international community. The military escalation between Hamas and Israel intensified on the night of Tuesday to Wednesday, as the UN envoy warned of a risk of “full-scale war”, as the Council of United Nations security must meet urgently on Wednesday. During the night, Israeli Prime Minister Benjamin Nethanyahou declared a state of emergency in the city of Lod, a theater in recent hours according to the police “riot” of the Arab minority. And he assured that the Hebrew state would “intensify” its military action.

On the Palestinian side, Israeli attacks carried out with fighter jets and combat helicopters have left at least 32 dead, including ten children, and at least 220 injured, according to the Ministry of Health in Gaza. Commanders of Hamas and Islamic Jihad, the second armed group in the Gaza Strip, also perished in the strikes, the groups confirmed.

On Tuesday evening, a dozen-story building in central Gaza City, in which top Hamas figures had their offices, was completely destroyed in an Israeli strike, an AFP journalist said.

State of emergency in Lod

In response, Hamas said it had launched 200 rockets at Tel Aviv, where alarm sirens sounded in the evening. It is the largest procession of missiles fired in years towards this Israeli metropolis. Despite the presence of the Iron Dome, which intercepts a vast majority of rockets, a woman was killed in Rishon Letzion, on the outskirts of Tel Aviv, bringing the death toll on the Israeli side to three on Tuesday, while dozens of injured, some of them in critical condition or victims of panic attacks, have flocked to hospitals, according to police and emergency services. An empty bus was hit and vehicles charred in Holon, near Tel Aviv, as flights were temporarily suspended at Ben Gurion International Airport.

In a statement, Benjamin Nethanyahu said he had given the green light to declare a “state of emergency” in Lod, his services said, as police reported “riots” by the local Arab minority after the violent death the day before of an Israeli Arab in this city in the center of the country.

Netanyahu himself went overnight to call for calm as a strong security system was put in place in the city which also adjoins Ben-Gurion International Airport. Monday evening, this mixed city – 77,000 inhabitants, including 47,000 Jews and 23,000 Arabs – located in the suburbs of Tel Aviv had been the scene of violent clashes and an Israeli Arab had been killed there, the local police had confirmed to AFP.

The international community has called for calm and Muslim countries have expressed outrage at the worst outbreak of violence in years between the ruling Islamist movement in the Gaza Strip and the Hebrew state, sparked by clashes in Jerusalem -Is.

Faced with the violence, the UN Security Council will hold another urgent closed-door meeting on Wednesday on the conflict, the second in three days, diplomatic sources said. The first meeting on Monday ended without any joint declaration due to the reluctance of the United States to adopt a text “at this stage”.