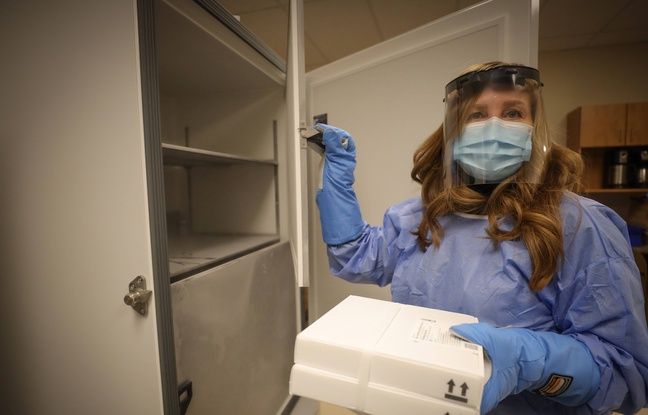 To prevent the leakage of the doses needed by Europeans, faced with the 3rd wave of the pandemic, to other countries, in particular the United Kingdom, the EU decided on Wednesday to place vaccine exports under close surveillance. anti-Covid products on its soil.

“The EU is facing a very serious epidemiological situation and continues to export significant volumes to countries” producing their own vaccines or where vaccination is more advanced, said Vice President of the European Executive Valdis Dombrovskis . “We have therefore adopted two adjustments to the current mechanism” of export control to “resolve these imbalances” and to “guarantee” supplies to the Twenty-Seven, he announced at a press conference.

An objective of “reciprocity” with the United Kingdom

A system in place by Brussels at the end of January already provided for, before any export of vaccines, the green light from the Member State from which the doses originate and from the Commission. Some 300 authorizations have been issued since, to send 40 million doses to 33 countries – with a single refusal, for a delivery of AstraZeneca to Australia, from Italy. The European executive intends to tighten export conditions to countries which themselves produce anti-Covid vaccines without sending them back to the EU. In its revised text of the regulation, the Commission notes that certain third countries are blocking exports of doses to the EU “either by law or by contractual or other arrangements concluded with vaccine manufacturers”.

An objective of “reciprocity” that Brussels intends to oppose to London. The EU exported some 10 million doses of all vaccines to the UK between February 1 and mid-March, but conversely, it received no doses produced on UK soil – while the contract signed by AstraZeneca provided for the delivery of doses produced in two factories in the United Kingdom. The company had explained that its contract with London required it to honor British orders as a priority.

Intense discussions are underway between Brussels and London to find a compromise, in particular on the outlets of a factory producing the AstraZeneca vaccine in the Netherlands, and on the verge of being approved by the European regulator to be able to supply the EU. “In this country, we do not believe in blockages of vaccines or vaccine components, whatever they are”, reacted Tuesday the British Prime Minister Boris Johnson. Likewise, the EU continues to send doses to countries which do not produce vaccines but whose populations are already widely vaccinated or benefit from a better epidemiological situation, observes the Commission.

In this case, “Member States will therefore have to refuse exports accordingly”, according to the revised regulation. And while the control mechanism has until now provided for exceptions for dozens of destinations (low-income countries, certain states neighboring the EU), all these exemptions are suspended, apart from a handful of micro-states such as San Marino, Andorra and the Faroe Islands. The revised device requires an examination of almost all exports, to prevent a company “circumventing” a ban, by passing through another country the doses blocked by the EU, said a European source.

What to strengthen the pressure on AstraZeneca: the President of the Commission, Ursula von der Leyen, had threatened Saturday to block the exports of the Swedish-British laboratory if the EU did not first receive the promised supplies. AstraZeneca plans to deliver 70 million doses to Europeans in the second quarter, against 180 million provided for in the contract signed with the EU, after having provided only a third of the deliveries promised in the first quarter. However, the Italian press reported on Tuesday the recent discovery of a stock of 29 million doses of AstraZeneca on a finishing site in Italy, enough to fuel the mistrust of Europeans.

Tighter export controls are dividing the Twenty-Seven. France and Germany are in favor, like the Italy of Mario Draghi who called on Wednesday to “make full use” of the mechanism and to demand that laboratories “fully honor their contractual commitments”. Conversely, Belgium and the Netherlands, where the pharmaceutical industry is very present, are alarmed at possible retaliatory measures elsewhere in the world, which could hamper supply chains for the production of vaccines. For its part, Dublin said it was fiercely opposed to any complete “block” of exports.