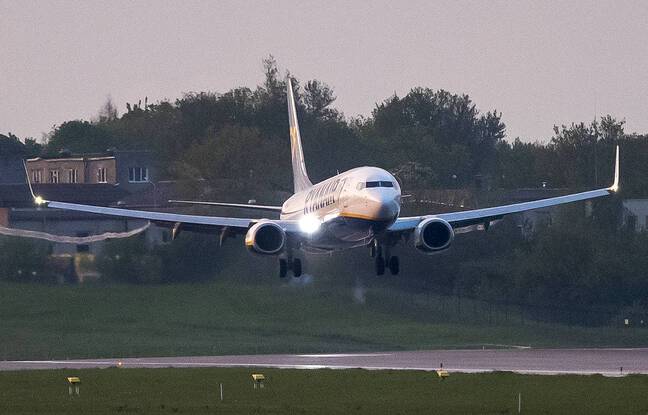 What will the EU’s response be to Minsk? EU leaders will discuss new sanctions against Belarus on Monday evening after the interception of a plane from Athens to Vilnius and the arrest of an opposition activist that sparked outrage.

The summit of the Twenty-Seven scheduled until Tuesday face-to-face in Brussels was to be devoted to tensions with Russia, relations with the United Kingdom post-Brexit, through the resumption of tourism in anticipation of the summer holidays and coordination in the face of Covid-19, as well as the fight against global warming.

But the forced diversion of the Boeing 737-800 of the company Ryanair making the connection between two member countries of the EU and NATO, and which carried many European nationals, imposed itself on the program.

“The incident will not remain without consequences,” warned the President of the Council, Charles Michel, conductor of the summit, calling for an investigation by the International Civil Aviation Organization (ICAO), a body attached to the ‘UN. European Commission President Ursula von der Leyen has called for sanctions against those responsible for this “scandalous and illegal” behavior. The head of diplomacy Josep Borrell, in a statement on behalf of the 27, also referred to sanctions and called for an international investigation into “the violation of the rules” of air transport.

France, like Lithuania, has suggested an “airspace ban” from Belarus. Polish Prime Minister Mateusz Morawiecki spoke of “state terrorism”, Dublin and Paris denouncing an act of “piracy”. Belgium wanted the Belarusian company Belavia to no longer be allowed to land in the EU.

NATO, which wants an “international investigation”, is due to meet with its ambassadors on Tuesday.

The European accusations were rejected as “baseless” by Belarus, which claimed to have acted legally by intercepting this commercial flight after an ultimately false bomb threat.

Moscow, ally and sole support of Belarusian President Alexander Loukachenko, judged the reactions of Europeans “shocking”, noting that Western states have in the past been guilty of “kidnappings, forced landings and illegal arrests”.

ICAO has argued that the forced landing “could be a violation of the Chicago Convention”, which protects the sovereignty of nations’ airspace.

The EU was preparing, even before these events, to strengthen the sanctions already taken against the Belarusian regime. Josep Borrell had indicated on May 10 that he hoped for a decision on an expansion of the measures “in the coming weeks”. It was to result in an extension to several dozen people from the list of officials and entities targeted, according to diplomats.

The EU’s foreign minister is still expected to propose measures after the hijacking of the plane, according to a diplomatic source.

Unanimity of the 27 is required for sanctions.

Some 88 people, including Alexander Lukashenko, and seven entities have already been sanctioned with a travel ban in the EU and an asset freeze for the repression of the opposition and the presidential election of August 9, 2020, deemed “rigged” by the Europeans.

Russia in the game

Despite European and American sanctions targeting the Belarusian president and senior officials, Lukashenko has shown no sign of compromise in the face of the protest movement, on the contrary reinforcing the repression.

The Twenty-Seven will also address the issue of renewed tensions with Moscow, after the Russian sanctions taken at the end of April against European officials in retaliation for measures taken by Brussels in March to protest against the arrest of the opponent Alexeï Navalny.

These sanctions came after a series of reciprocal expulsions of Russian and European diplomats, amid accusations of espionage, cyber-attacks or interference in elections.

European leaders must instruct Josep Borrell to write a report to establish the European strategy to adopt vis-à-vis Russia.