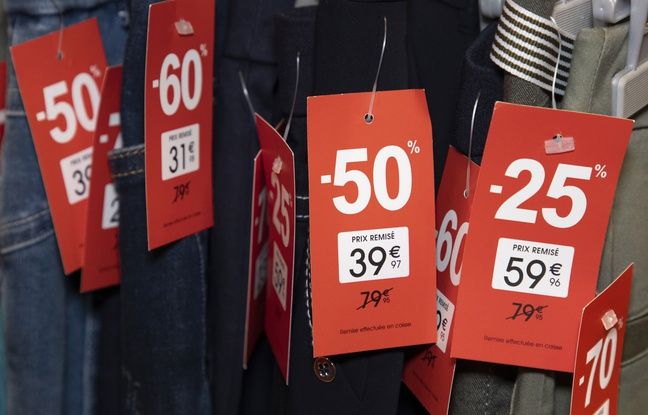 The government had extended the winter sales by two weeks, until Tuesday, to promote the flow of stocks; but the French have continued to shy away from purchases of clothing and other personal effects, and professionals often look grim.

“Today is not a good day at all.” Invited on Friday to take stock of the gloomy winter sales, Sophie Brenot, president of the National Federation of leather goods and travel retailers, measures the effects of health concerns on her clients, “who are not feeling so good. “.

“The sales were not there this year”

If the situation is “not catastrophic” for Maguy Braida, manager of a perfume store in the center of Nice, “Rose de France”, she also observes that “customers are more inclined to take what they need than to have fun ”.

Further west, Stéphanie Verrimst, general delegate of the Union du commerce du Pays de Rennes, believes that “the sales have not been there this year”. Arrived “late”, “extended at the last minute”, they suffered from the closure of shopping centers of more than 20,000 m² a few days after their launch. It “broke the dynamic”.

The most affected are the personal equipment traders. “Over the month of February and taking into account all the stores included in our panel, we are at -22% of sales in the month of February”, explains Yohann Petiot, general manager of the Alliance du commerce (retail clothing, footwear and town center).

“The customers’ budget has already been partially used”

This figure takes into account stores that had to close in malls in February. It is all the more spectacular as it compares a period of sales to a period without promotions, since, in 2020, the sales took place especially in January! For Yohann Petiot, it is the consequence of “all the restrictive measures” which disrupted the period.

“The sales started on January 20,” also recalls Sophie Brenot. “By the middle of the month, the customers’ budget has already been partially used, with a lot of private sales, promotions on the internet. “And then” with the restrictions and teleworking, people go out less, there are fewer weddings, fewer trips … “

Some are doing better: those who have been able to pass between the drops of administrative closures are already benefiting from a “postponement of consumption of closed stores”, observes Yohann Petiot. Still on the basis of a panel of around forty brands representative of the clothing market, co-produced with Retail Int, he observes that those which were open in February saw their sales increase by 28%. These stores were also able to benefit from a shift in sales.

“The home sector is doing well”

In addition, certain geographical areas are better off, in the Parisian suburbs or in Normandy for example, as well as certain categories of goods. “The home sector is doing well, the trend compared to last year’s sales is even increasing”, adds Bernard Chaix, owner of a furniture store in Nice and vice-president of the Chamber. of local trade (CCI).

For Rémy Langlois, vice-president of the CCI of the Pays de Rennes, “ready-to-wear will have to review its economic model”, with a physical point of sale which “loses its attractiveness”. The situation has encouraged the digital transition, but “poses cash flow problems for businesses that have not been able to liquidate their stock and are already seeing new collections arriving when they have little money in the checkouts. “

This disparate situation also complicates the marking of aid. Yohann Petiot, from the Alliance du Commerce, asks for appropriate support measures for those who are closed today, because “not everyone lived the same month of February”.