Exchange of fire at police headquarters in Jakarta 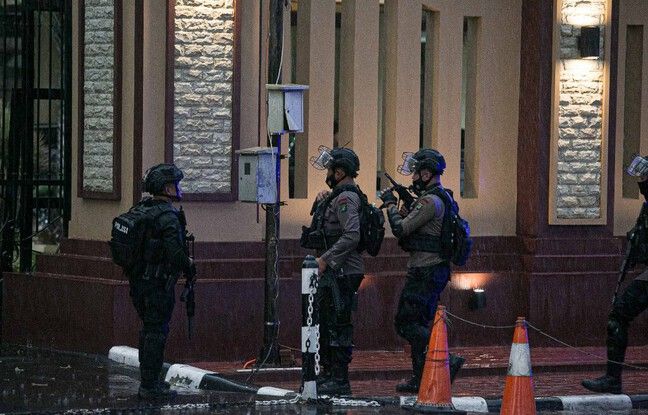 A person was shot dead on Wednesday at the police headquarters in Jakarta (Indonesia) after exchanges of fire with Indonesian security forces, local media reported, citing “a suspected terrorist attack”.

The police did not immediately respond to requests to verify this information.

Several television stations broadcast images showing a person in female clothes, blue veil and long black dress, entering the perimeter of the headquarters and approaching police officers as gunshots echoed. She then appears hit by shots, falls to the ground, then remains motionless. Several journalists in the area confirmed having heard an exchange of gunfire.

This incident came three days after a suicide bombing attack on the island of Celebes. The attack which targeted the cathedral of Makassar (east), leaving about twenty wounded, occurred on Sunday after Palm Sunday. The attackers, a young couple, are the only ones to have died in this attack which the national police, which warned against other attacks, attributed to the Indonesian radical group Jamaah Ansharut Daulah (JAD), close to the group. Islamic State. More than ten suspects were arrested over the following days for their alleged role in Sunday’s attack.

Police stations have in the past been a frequent target of attacks by radical groups in Indonesia. This Southeast Asian archipelago, which has the largest Muslim population in the world, has been grappling with extremist currents for two decades. It has seen several deadly attacks attributed to Islamist groups. More than 200 people, mostly foreign tourists, were killed in 2002 in attacks on the island of Bali, which were attributed to the Indonesian Islamist organization Jemaah Islamiyah (JI). In May 2018, a family of six, including four children, targeted with explosive devices three churches in Surabaya, Indonesia’s second city: more than ten worshipers were killed.

On the same day a second family had apparently set off a bomb in an apartment, apparently by accident, and the following day a third had carried out a suicide attack on a police station. These attacks, which killed a total of 15 people and in which 13 assailants died, were the deadliest in more than a decade in the archipelago. These attacks were also attributed to the JAD, which came to prominence with a gun and bomb attack at a Starbucks coffee shop in which eight people including four assailants were killed in 2016.

Yes, Eric Zemmour’s speaking time can be deducted even if he is not a candidate