Explosive negotiations between Paris and Brussels on the future of EDF 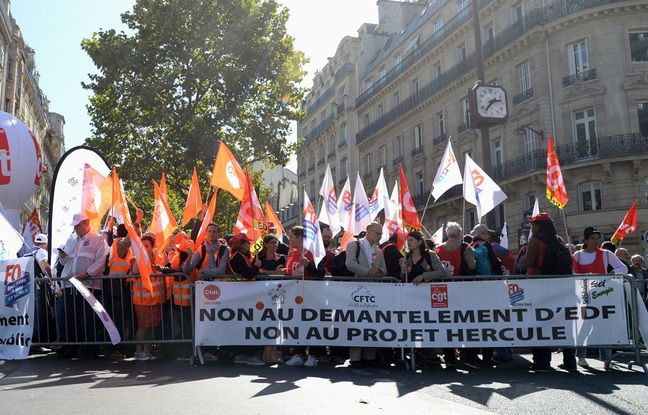 Complex and politically explosive, the negotiations between France and the European Commission on the future of EDF are struggling to succeed, while the clock is ticking.

EDF CEO Jean-Bernard Lévy was tasked in 2018 by the public authorities to propose a plan for the reorganization of the company, which is nearly 84% owned by the State.

These proposals were to be presented at the end of 2019, but the deadline was postponed because they are conditional on the progress of discussions between France and Brussels, in particular on nuclear.

The outcome “is uncertain”

“We are in the process of finishing the negotiations”, assured the Minister of Ecological Transition Barbara Pompili in November. The objective is “to achieve as quickly as possible”. Time is running out, because this possible reform should pass through a law next year, even if the unions fear today the use of ordinances.

“The government and the European Commission continue to exchange views to find an agreement. Discussions can continue after December 31, ”says the minister’s entourage. But “if it is not ripe, we do not do it”, proclaims another government source, cautious.

On the part of the Commission, we are content to confirm “ongoing contacts with the French authorities on the reform of regulated access to nuclear energy”.

The negotiations “have intensified in recent months” but “we are not at the end”, also underlines the management of EDF in an argument distributed internally. The outcome “is uncertain” as “the parameters are numerous and unstable”, insists the electricity producer.

This project could result in a split of EDF into three entities: a public company (EDF bleu) for nuclear power plants, another (EDF vert) listed on the stock exchange for the distribution of electricity and renewable energies and a third ( EDF azur) which would cover the hydroelectric dams.

This reorganization would have several objectives. First, to revalue French nuclear production while meeting the demands of Brussels on competition – a point on which there is still no agreement. Today, EDF is forced to sell part of this electricity to its competitors at a price that the producer considers much too low.

The public authorities would also like the “green” EDF to finance the development of renewable energies by raising money on the markets, despite the high debt of the electricity giant.

Finally, the old file of hydroelectric dams was joined to the negotiations in order to find a solution to an old dispute with the Commission, which gave notice to France years ago to open its expired concessions to competition.

The fears of the unions and the opposition

Officially on the government side, this reorganization must be done within an integrated group with a single strategy and employees under the same status. But the unions and a good part of the opposition – on the left and on the right – see it as a risk of dismantling.

Socialist deputies and PS and environmental senators have indicated that they want to table a proposal for a shared initiative referendum (RIP) against the project. The EDF unions, very upbeat, also organized several well-attended strike days in the company.

Prime Minister Jean Castex assured that he did not want to “dismantle this great national company”, without reassuring.

“A lot of tension on this subject”

The reorganization would place “EDF in a very fragile situation”, fears Virginie Neumayer, of the CGT EDF. “The current nuclear fleet would be condemned in the short term within the framework of the Hercule project since it would be isolated from other EDF entities”, she believes, emphasizing the essential interactions between the various businesses in the company. “Having different strategies penalizes the overall activity when it is not made consistent”, adds the union official.

These concerns are heard even by the parliamentary majority. “I am very very vigilant” because “I feel that there is a lot of tension on this subject”, recognizes the deputy (LREM) Jean-Marc Zulesi. “From the moment when there are many concerns on the subject, there must be transparency and that national representation, whatever the parties, be associated with the discussions,” he pleads.