Faced with the epidemic, emergency economic aid set to last in 2021 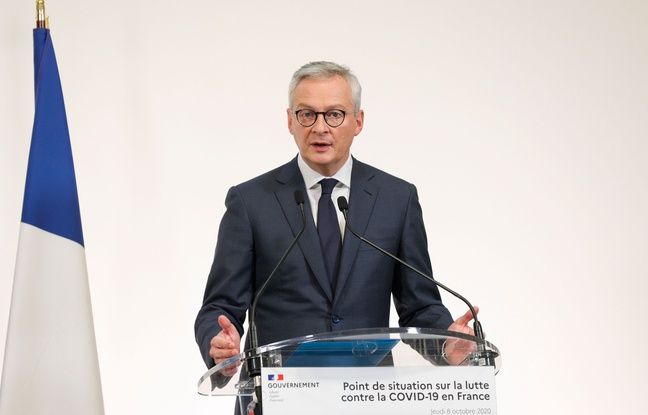 Due to the prolonged coronavirus epidemic, emergency aid to businesses and households in 2021 will be extended in 2021, but they will be more targeted, the government announced on Friday.

Nearly 20 billion additional euros will be mobilized in the draft budget for 2021, under discussion in Parliament. “It is not time to lift the measures to support the economy”, agreed the Minister of the Economy Bruno Le Maire on Friday.

A “very fine control” of expenditure

While the government hoped that 2021 will be the entire year of recovery, this amount represents almost what it has planned to disburse next year as part of the “Recovery Plan” mission. This plan of 100 billion euros must indeed be spread over two years, even if a small part of the expenditure began at the end of 2020. The second confinement and deconfinement which will ultimately be slower than expected will further increase the impact of the crisis affecting many companies, in particular in leisure activities, restaurants and events.

To limit a wave of bankruptcies next year, and the hundreds of thousands of job losses that they would cause – 180,000 according to a forecast by the French Economic Observatory (OFCE) published on Friday – the government is choosing to keep the economy on a drip. But Bruno Le Maire warned: “We will redirect this massive aid to the sectors which are most affected by the health crisis”. “We are in the most delicate moment, the moment of the transition from a global crisis, which affects all sectors, to a differentiated crisis, which very suddenly affects certain sectors while others have restarted,” he said. he said, defending a “very fine control” of spending to target those who need it most.

The two main instruments of this support will be the solidarity fund, for 7 billion euros, and partial unemployment, for 11 billion. The government reinforced the solidarity fund in December, by making it possible in particular to cover 20% of lost turnover up to 200,000 euros for closed companies, as well as for their suppliers who have lost more than 70 % of their income. Bruno Le Maire praised a “very generous” system comparable to those implemented elsewhere in Europe, in particular in Germany. The government also provides 1 billion euros of exemption from charges for companies, and aid for ski resorts and airports.

And while poverty rises among the most vulnerable, additional resources will be dedicated to young people and food aid. Of these 20 billion euros, 8.5 billion will be financed through carryovers of unspent credits this year. In total, therefore, in 2020, around 77 billion euros will have been spent by the State to deal with the crisis, instead of the 86 billion budgeted. Added to this are around 100 billion euros in lost revenue and more than 300 billion euros in loan guarantees.

Despite everything, with a growth forecast that the government maintains at 6% in 2021, after a historic recession this year (-11% according to the government’s forecast), the deficit and the debt will ultimately be higher than it is. anticipated. The deficit should reach 8.5% of GDP next year, against 6.7% initially forecast, and after 11.3% expected this year.

In addition to these support costs, this difference is explained “for a very very large part by the macroeconomic effect and the loss of revenue” expected next year, as well as by the need to “finance the purchase of additional sanitary equipment. », Detailed the Minister of Public Accounts Olivier Dussopt. No respite, however, for the public debt, which will continue to soar next year, while the government was hoping to start its decline thanks to the recovery. He expects it at 122.4% of GDP (against 116.2% forecast so far), after 119.8% this year.