False Covid-19 patients in a hospital? This is an exercise 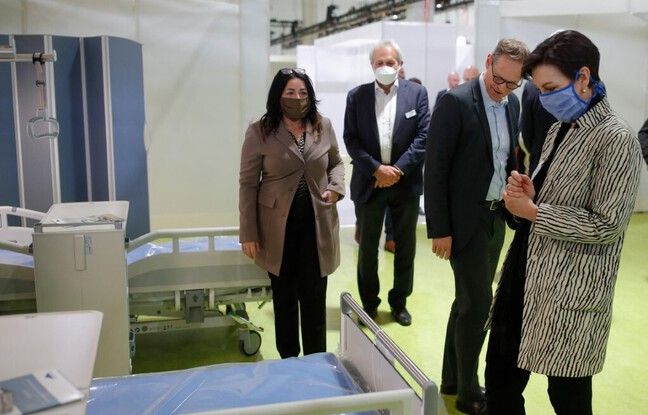 A new suspicion, unfounded, of false patients. The story takes place this time in Germany: a young girl lies in a hospital bed, wearing a mask, while a person puts a pipe in her nose. Seeming to be in great shape, she
laughs with two other young women, also bedridden, and shows a sheet written in German. “It’s a joke! She says in English.

Since the start of the coronavirus pandemic, Internet users have questioned the reality of hospital occupancy rates. And the hijacking of this video is another example.

The images show an exercise that took place on September 10, 2020 at a Covid-19 treatment center in Berlin. This was to prepare the teams to take care of Covid + patients in the event of an increase in their number.

70 extras played the role of the sick. Vivantes, the hospital group that manages the center, specifies that they have received compensation for their participation.

These extras “played the admission, care, transfer and discharge of fictitious patients [atteints] of Covid-19, details the group in a press release published the day after the exercise. Through the different scenarios, the patients gave the staff tasks to perform: for example, the respiratory distress situation, a necessary resuscitation, or individual requests such as help with going to the toilet or asking for a drink. The organizers were satisfied with the result of the exercise. “

Several clues allow us to go back to the source of the video: the young woman speaks mainly in German and shows a paper written in this language, suggesting that the video was shot in a German-speaking country. On several occasions, the name of the hospital group is visible on the covers of the beds.

The video does not appear on Vivantes’ YouTube account. On the other hand, a search using key words in German refers to an article by our colleagues from the ZDF, dated September 14. The video was already the subject of a hijacking, just a few days after it was posted on the young volunteer’s Instagram account.

Faced with the hijacking of his video, it published an update on September 14. She recalls that she did take part in an exercise to train staff.