Fiame Naomi Mata’afa, feminist and environmentalist, was “invested” as Prime Minister in an impromptu ceremony 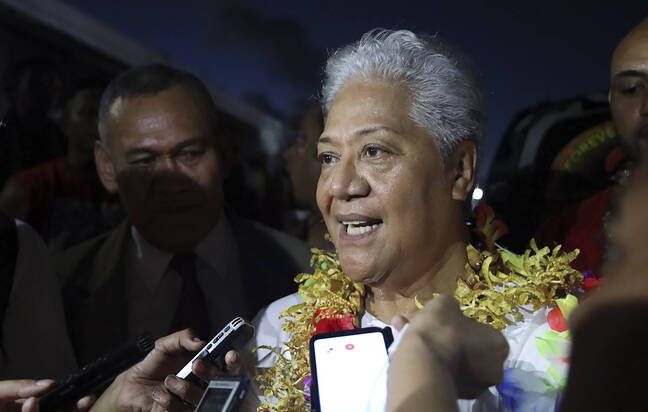 Fiame Naomi Mata’afa, the first woman in the process of taking over the head of the Samoan government, was “invested” as Prime Minister on Monday in an impromptu ceremony in the gardens of the Parliament, after she was denied access to the building by outgoing power, according to an AFP journalist on the spot.

This “swearing in”, which risks being challenged in court, comes after six weeks of a political and legal standoff that followed the hotly contested elections of April 9.

In power for 22 years, Tuilaepa Sailele Malielegaoi lost the ballot but at this stage refused to cede power, to the point that some are calling for a coup.

New Zealand and Australia have appealed for calm and urged the Pacific archipelago to respect the rule of law.

Oath in the garden

Accompanied by judges responsible for attending her swearing-in to become the first female Prime Minister, Fiame Naomi Mata’afa was refused entry into the chamber of the legislative assembly. The Secretary of the Legislative Assembly went out to apologize, claiming that, by order of the head of state Tuimalealiifano Vaaletoa Sualauvi, he could not allow Parliament to sit.

Held outside the chamber, Fiame Naomi Mata’afa and her parliamentary delegation stood for hours under a large marquee in the gardens, while their supporters chanted slogans. The elected officials finally took the oath one by one during a ceremony which, despite its unusual location, had all the features of an official investiture. Its legality was immediately contested by opponents of the elected Prime Minister.

From political quarrel to coup

Samoa became independent in 1962, after nearly half a century under New Zealand protectorate status. With the exception of a short period in coalition in 1986-1987, the Party for the Protection of Human Rights (HRPP) of Tuilaepa Sailele Malielegaoi has presided over the destinies of the country since 1982.

Fiame Naomi Mata’afa, head of the FAST party, is the daughter of the first Samoan Prime Minister, who died in 1975. She is considered a pioneer of the cause of women in the very conservative and very religious archipelago, mainly Protestant.

She previously belonged to HRPP and was even Tuilaepa Sailele Malielegaoi’s deputy until she fell out with the latter over political differences.

She is widely recognized abroad as a voice in the fight for equality between men and women, and as a committed activist against global warming.