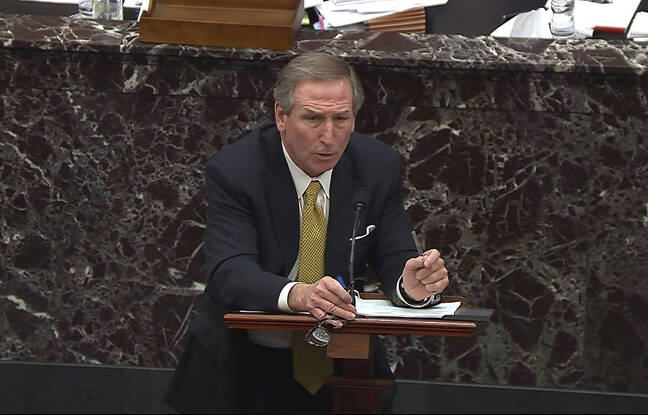 Three small hours and then leave. On Friday, the lawyers responsible for defending Donald Trump, tried before the Senate for “incitement to insurgency” in the context of the attack on the Capitol on January 6, did not lag behind. In less than half a day, they assured that Donald Trump “could not” have instigated violence that was “premeditated”. And, with a video played on repeat, they accused the Democrats, who regularly use the same combative rhetoric as the ex-president, of being “hypocrites” motivated by “political revenge”. The verdict is expected on Saturday, and Donald Trump should, barring any surprise, be acquitted.

Bruce Castor once again insisted: January 6 represents “a terrible day that shocked us all”. However, he assured that the violence did not reach the level of an “insurrection”, noting that the rioters had “not seized power or the television channels”.

In their presentation, the Democratic prosecutors insisted on the speech of Donald Trump who called on his supporters and the elected Republicans to “fight fiercely” (“fight like hell”). Lawyers for the 45th President of the United States responded with a montage of more than 10 minutes of elected Democrats like Elizabeth Warren, Chuck Schumer, Nancy Pelosi, promising to “fight”. And Cory Booker saying he wanted to “punch” Donald Trump or Joe Biden who wanted to “kick the butt” of his opponent.

According to lawyers, this kind of speech is “usual rhetoric” in politics, and is defended by the 1st Amendment on freedom of expression. They also recalled that the Democrats had cut part of the speech of the American president calling on his supporters to demonstrate “peacefully and patriotically” in front of Congress.

In a riskier strategy, Donald Trump’s defense argued that he could not have instigated an attack that had been “premeditated.” They cited the example of messages exchanged on social networks, and the chronology of events, with a first security cordon broken down before Donald Trump begins his speech.

But the day before, Democratic prosecutors had assured that the speech of the ex-tenant of the White House was “the climax” of a campaign of several weeks. According to them, Donald Trump “increased the pressure with his big lie” on a “stolen election” then “lit the fuse”.

The remainder of Friday’s session was devoted to a question-and-answer session. Among the Republicans who could vote to condemn Donald Trump, we have heard from Susan Collins, Lisa Murkowski, Mitt Romney and Bill Cassidy. They asked the ex-president’s lawyers for details on the timeline: When did he know the Capitol had been invaded, and did he know Mike Pence had been evacuated when he criticized him in a tweet . The lawyers kicked in, but after the hearing, Alabama Senator Tommy Tuberville confirmed to reporters that he had made it clear to Donald Trump that Mike Pence had just been evacuated during a telephone conversation during the assault on the Capitol.

In view of the statements of elected officials, the most likely scenario remains that between 3 and 8 Republicans vote with the Democrats to condemn Donald Trump, far from the 17 mark required for his dismissal. The session resumes this Saturday at 10 a.m. (4 p.m. KST). If no witnesses are called, the final vote should be held around noon (6 p.m.).

Share
Facebook
Twitter
Pinterest
WhatsApp
Previous articleThe PSE signed five months after the announcement of the closure of the Béthune site
Next articleStanding ovation for Officer Eugene Goodman, decorated with a medal for his bravery

A program exempts certain personalities from the rules on content moderation