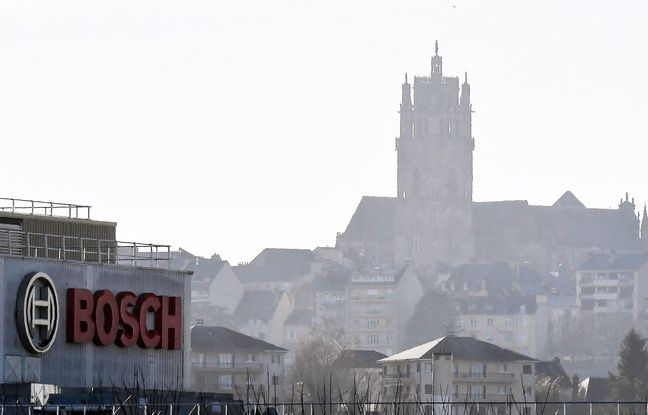 For Bosch management, this measure is “essential” because of the fall in sales of diesel-powered vehicles. The German automotive supplier announced on Friday that it would cut 750 jobs by 2025 at its Onet-le-Château factory, in the suburbs of Rodez. An announcement very hard to cash on the spot, while the site is the main private employer in Aveyron.

“We will reduce the teams in the coming years, by 2025, to 500 people,” said Bosch president for France and Benelux, Heiko Carrie. The 1,250 employees of the Aveyron plant manufacture injectors and spark plugs for diesel vehicles, the demand for which has declined considerably. “The will is to avoid forced departures” through early retirement and voluntary departures, says the leader.

An “unacceptable” plan for the mayor of Rodez

The workforce reduction will begin in 2021. At the end of the year, the number of employees will drop to 1,100, Heiko Carrie predicts. This restructuring “gives a real perspective for the site and the stability necessary for the years to come,” assures the boss of Bosch France. We are no longer in a logic of closing the site. “

The LREM mayor of Rodez Christian Teyssèdre considers this social plan “unacceptable” and Bosch’s attitude “scandalous”. “They have won millions of euros here for 50 years, they have led us for three years,” he said.

The unions’ doubts about the sustainability of the site

At its peak in the early 2000s, the factory had up to 2,400 employees. “We are angry. Indirectly, they announce the end of the site to us. To save the site in the medium term, it would take investments, but there is nothing, “reacted Vanessa Negre, secretary CGT, majority union at Bosch in Onet-le-Château.

She is skeptical about the absence of layoffs. “If there aren’t 700 volunteers, there will be a PSE behind”. And she does not see employees volunteering if they do not have a professional alternative.

For the SOUTH delegate Cédric Belledent, “this announcement is a real blow, a knife in the back! We will do everything to avoid this tragedy. So many job cuts, we did not expect and it is difficult to swallow ”.

“A factory with 500 employees is not acceptable: it also means that if in five or six years the market is still experiencing difficulties, the ax will fall,” said the trade unionist, referring to the guarantee on maintenance. of the 500 jobs that only runs until 2027.

I was informed today by the management of the group #Bosch of its desire to maintain the industrial site of #Rodez but reduced to 500 employees in 2025, or nearly 750 job cuts.
The decision of the German group present here for almost 60 years is a big blow.

For his part, the Minister of the Economy Bruno Le Maire underlines that “the closure of the site is now ruled out (…) thanks to the mobilization of all, foremost among them the employees”. He calls on Bosch to avoid “forced departures” and to “compensate for the loss of industrial jobs”, for example by supporting “external partners who could set up on the site to create new activities”.

Present in the automotive, electronics and energy sectors, Bosch has nine factories in France where the equipment manufacturer employs around 6,000 people. Worldwide, it has nearly 400,000 employees.

In December, the German company announced the shutdown at the end of 2021 of a production line for electrically assisted steering columns at its site in Vendôme (Loir-et-Cher), i.e. a loss of 75 jobs out of 500.