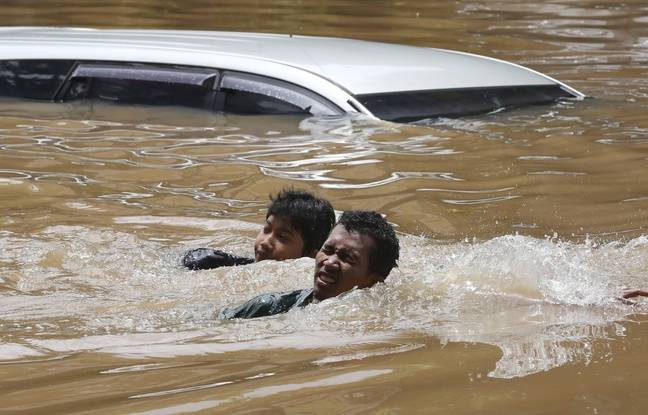 Entire neighborhoods of Indonesia’s capital Jakarta and dozens of main roads were flooded on Saturday after torrential rains overnight, also leading to the evacuation of more than 1,300 residents to temporary shelters.

In parts of this Southeast Asian city, the water level was between 1.2 and 2.7 meters.

In some images, we could see rescuers helping the elderly and children in houses in the southern and eastern neighborhoods of the city, particularly affected. Cars were also submerged in waterlogged streets.

Evacuate children and the elderly

National Relief Agency spokesman Yusuf Latif said the floods were caused by torrential rains: “It has been raining since last night and particularly hard due to the extreme weather conditions in Jakarta. “

“Our priority is to take care of children, babies and the elderly,” he said, adding that so far no casualties have been reported.

A megalopolis of around 30 million inhabitants, Jakarta is regularly the victim of flooding during the rainy season. Last year, the city experienced one of the deadliest floods in years, with downpours also leading to landslides.

At least 67 people were killed in Jakarta and surrounding towns by then, with floodwaters sometimes reaching the second floors of some buildings after rivers overflowed.

Share
Facebook
Twitter
Pinterest
WhatsApp
Previous articleFrom maternity leave to returning to work, four tips for young mothers
Next articleAlmost half of the vaccines administered worldwide have been administered in the seven richest countries