For Boris Johnson the relationship with the United States is “indestructible” 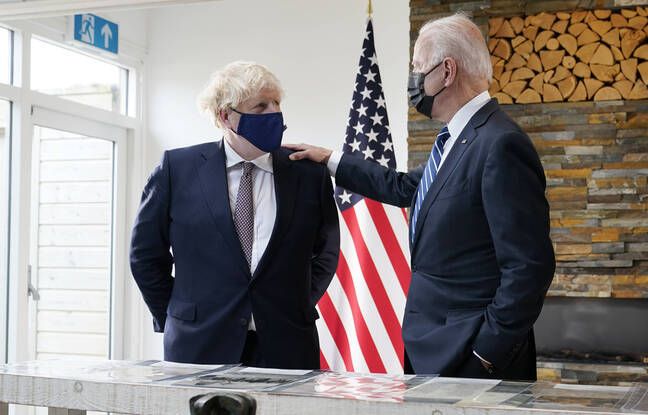 Obviously, the first meeting Thursday between the British Prime Minister and US President Joe Biden went well. In an interview broadcast Friday morning by the BBC, Boris Johnson returned to the links between the United States and the United Kingdom. “This is a relationship, which you can call the deep and meaningful relationship, whatever you like, the indestructible relationship,” he said on the eve of the G7 leaders’ summit which opens on Friday.

“It is a relationship that has lasted a very long time and has played an important role in peace and prosperity in Europe and in the world,” added Boris Johnson. During their face to face Thursday, the two leaders discussed “25 subjects” in detail, including the disruption induced by Brexit in Northern Ireland.

The thorny subject of Ireland

Boris Johnson played down the displeasure of Joe Biden, proud of his Irish origins, over London’s attempts to reverse the “Northern Irish protocol”, which avoids the return of a border with Ireland but disrupts supplies between Great Britain and the Northern Irish province.

Whether it was him, the European Union, Washington, “everyone has a huge interest in ensuring that we keep the essential symmetry of the Good Friday Agreement”, which in 1998 ended three decades of conflict. bloody blood between loyalists, attached to the British crown, and Republicans in favor of the reunification of the island. “I think we can do it,” said Boris Johnson.

Harry Dunn case on the carpet

The Conservative Prime Minister also raised with Joe Biden the case, much followed in the United Kingdom, of the death of Harry Dunn, killed in a road accident caused by the wife of an American diplomat, who left quickly. in the United States, claiming diplomatic immunity.

Joe Biden is “actively involved in this matter,” said Boris Johnson, and “has his own personal reasons for being deeply concerned about this issue”, having lost his first wife and one-year-old daughter in a car accident. car in 1972. According to Boris Johnson, the “difficulty” lies in the “limits to what the executive can do with (…) the judicial system, but the two parties are working together”.

Share
Facebook
Twitter
Pinterest
WhatsApp
Previous articleWith the inscription “LOVE” on her jacket, did Jill Biden want to respond to Melania Trump?
Next articleThe only survivor of the cable car crash released from hospital