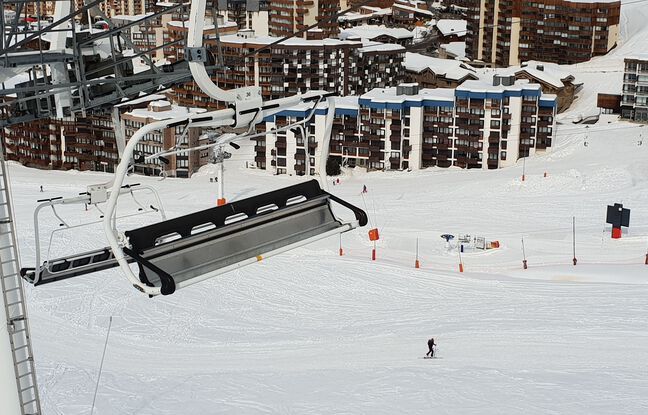 The results of the February holidays, so dreaded by ski resorts in France because of the closure of ski lifts, have just fallen. Attendance unsurprisingly experienced a significant drop of 48% compared to February 2020, with an average occupancy rate of 33% across all the massifs, according to figures released on Thursday by an association of elected officials.

The National Association of Mayors of Mountain Resorts (ANMSM) is alarmed by this “free fall” in winter tourism, in a press release citing figures from the G2A cabinet, which collects data from many accommodation providers. The mountain has as expected paid a heavy price for the restrictions linked to Covid-19. The president of the ANMSM, Jean-Luc Boch, underlines the disparity between the stations: “The big stations lost the most”.

The domains located at altitude, rather more important, thus observe an occupancy rate of 26% over the February holidays, which end on Sunday, that is to say a fall of nearly 60%. For their part, the low-altitude resorts are doing (a little) better, with a reduction limited to 40% compared to 2020. Over the entire winter season 2020-2021, the forecast occupancy rate is by 22.5%, or -43% compared to the previous season, which had already suffered due to the first confinement in March 2020.

“Even if there is a little attendance, economically, it does not work, regrets Jean-Luc Boch, who is also mayor of Plagne Tarentaise. What saves the mountain are the ski lifts, skiing. He estimates that around 10% of the turnover in this sector will be achieved this year.

Ancillary activities are “not viable”

According to him, the ancillary activities (snowshoes, tobogganing, dog sledding, ski touring…), “it feels good psychologically but it is not economically viable”. Especially since the activity is highly seasonal. “If you close the stations for four months, you close the region’s economic activity all year round,” he continues.

According to Domaines skiable de France, which represents the sector, the four weeks of February holidays represent 35% of annual activity, usually around 10 billion euros spent nationally in the resort.