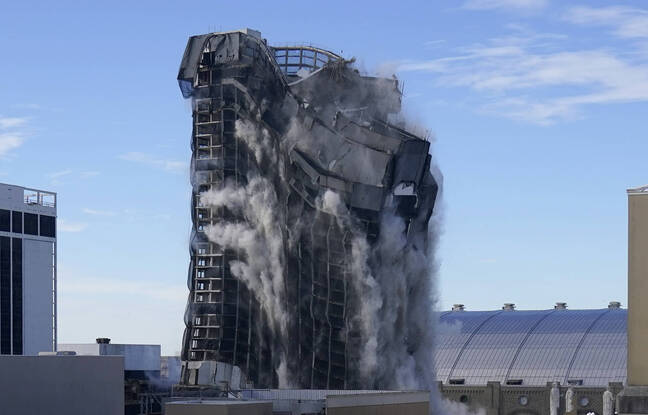 In the mid-1980s, it was one of the symbols of the Atlantic City boardwalk and the success of a young Brooklyn real estate developer. You could run into Madonna or Sean Penn or see Mike Tyson in the ring. Almost 40 years and three bankruptcies later, the Trump Plaza casino and hotel, unoccupied since 2014 and falling into ruins, collapsed like a house of cards thanks to 3,000 sticks of dynamite. In a perfectly controlled implosion.

Former President Trump cut ties with the casino in 2009 after a series of bankruptcy filings.https://t.co/MeQpmoGExN pic.twitter.com/GpocEJJJaB

The subsidiary of Donald Trump’s group which managed its activities in Atlantic City, Trump Entertainment Resorts, filed for bankruptcy three times, in 2004, 2009 and 2014, weighed down by debt each time. Donald Trump had already obtained, in 2014, that his name be withdrawn from the casino pediment, after having taken legal action, believing that the establishment was damaging the image of his group. Since 2016, the two-building complex belonged to investor Carl Icahn, who was one of the main creditors of Donald Trump’s Atlantic City branch.

In mid-June, in agreement with Carl Icahn, the mayor of the city, Marty Small, announced the demolition of the old casino, at the latest in February 2021, after having taken legal action because he considered the building dangerous for the residents. On several occasions, during storms, pieces of the facade had fallen on the seaside promenade, which runs alongside the establishment.

With the push of a button, the controlled implosion took place shortly after 9 a.m. in this coastal New Jersey town. A show loaded with symbol, less than a month after the departure of Donald Trump from the White House.