From Texas to Mississippi, a historic cold wave sweeps across the country 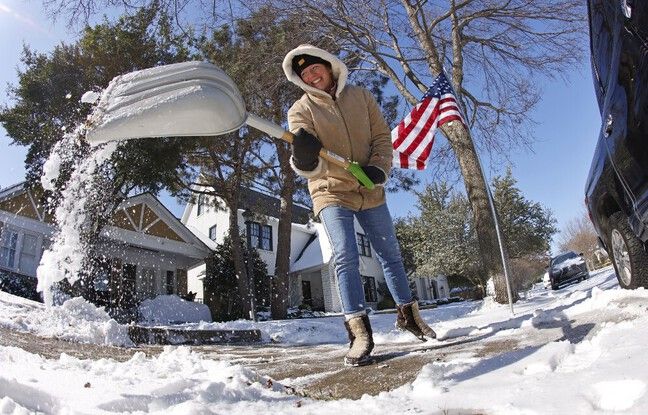 Freezing rains, snowfalls, blizzards … A polar cold has been affecting the United States for several days, from the east to the west of the country. An “unprecedented” cold wave, the consequence of a wind blowing from the Arctic. And this situation should continue in the days to come.

More accustomed to heat records than ice, Texas is particularly affected by this historic cold snap. A thick blanket of snow thus enveloped the streets, trees and cars of the state capital, Austin. Some places even saw the temperature drop to -18 degrees Celsius this weekend while a large city like Houston hit -9 degrees.

The inhabitants of Texan cities find themselves caulked at home, the children not being able to go out for lack of sufficiently warm clothes in this state where the usual average temperature is around 20 degrees. Due to heavy snowfall, frost and measures to prevent grid overload, nearly 2.8 million homes were without electricity Monday in the “Lone Star State”, according to the site Poweroutage.us.

Texas has made a declaration of a state of emergency for climatic reasons in its 254 counties, approved Sunday evening by President Joe Biden. “Every part of the state is going to experience freezing weather conditions in the coming days and I urge Texans to remain vigilant in the face of the very harsh weather that is coming,” Texas Governor Greg Abbott warned in a press conference Saturday.

The ice storm has already caused serious accidents. A giant pile-up on a highway near Dallas in particular left at least six dead and dozens injured Thursday. Also in the south of the country, the state of Tennessee was also in the snow, an impressive video showing, on social networks, a vehicle sliding on a frosty pavement transformed into an ice rink as soon as it left the garage.

Beyond Texas, at least six states: Alabama, Oregon, Oklahoma, Kansas, Kentucky, Mississippi issued state of emergency declarations and more than 3,000 flights were canceled Monday across the country according to the FlightAware website. “More than 150 million Americans live in a place where warnings of extreme cold, freezing rain or snowstorm vigilance plans have been put in place,” the National Weather Service (NWS) said Monday.

“This spectacular cold snap which hit the continental United States is linked to the combination of an arctic high pressure carrying freezing temperatures and a very active depression with waves of precipitation”, specified the institution. “Hundreds of cold records have been recorded and will be broken during this polar cold snap,” added the NWS.

In the center of the country, temperatures have already reached record highs during the weekend with -45 degrees Celsius in parts of Minnesota, one of the coldest states in the United States. Temperatures are likely to drop well below seasonal norms in the center and southern plains of the country until Tuesday, the weather services warned.