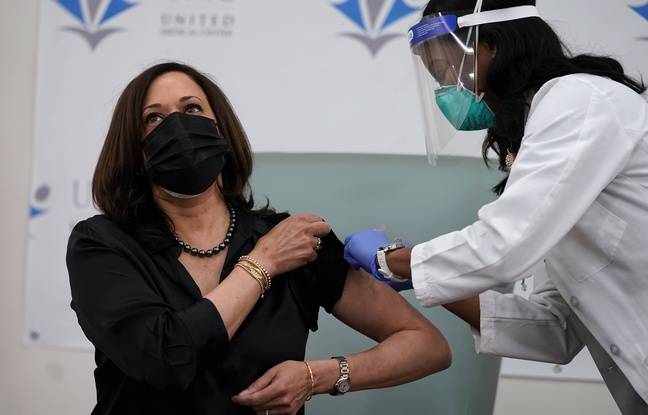 Kamala Harris received the first of two doses of Moderna’s vaccine against Covid-19 this Tuesday in Washington, calling on all Americans to also be vaccinated. “I want to encourage everyone to get vaccinated. It is relatively painless. It goes very quickly. It is sure, ”declared the future American vice-president in front of the cameras after receiving the injection.

“I barely felt it,” added the vice-president-elect behind her green mask at the time of the injection. Kamala Harris was vaccinated at a medical center in a neighborhood with a large African American population. Proportionally, the latter is particularly affected by the disease, and also very reluctant to vaccination.

“It’s about saving your life, the lives of your family members. “

“I trust scientists. And it is the scientists who created and approved this vaccine, hammered out what made the fight against the pandemic one of its priorities. So I urge everyone: when it’s your turn, get vaccinated. It’s about saving your life, the lives of your family members. “

The United States launched the largest vaccination campaign in its history in mid-December. Democratic President-elect Joe Biden, along with Republican Vice President Mike Pence, have also been vaccinated in public, to encourage people to trust the two remedies already authorized in the country, that of the Pfizer / alliance. BioNTech and Moderna’s.

More than 2.1 million people have received a first injection of one of two licensed vaccines, according to figures from the Centers for Disease Control and Prevention (CDC) on Tuesday. This number is far from the stated target of the Trump administration, which had promised 20 million people vaccinated by the end of the year.