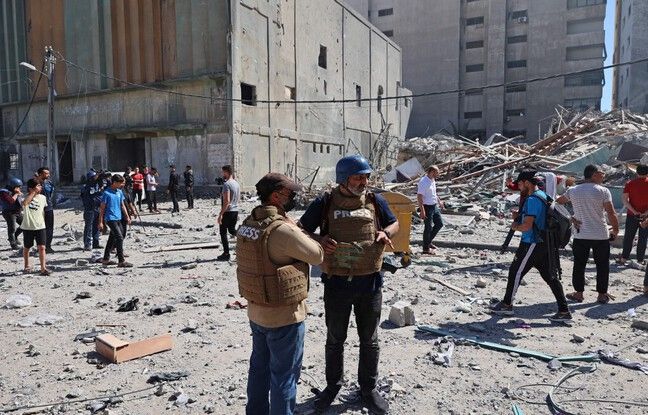 The media building in Gaza that was destroyed by an Israeli strike on Saturday was “a perfectly legitimate target,” Israeli Prime Minister Benjamin Netanyahu said on Sunday, claiming to be based on intelligence information.

The building, which housed in particular the premises of the American agency AP and Al-Jazeera television, also housed “an intelligence office for the Palestinian terrorist organization (…) which prepares and organizes terrorist attacks against Israeli civilians”, he explained on the American channel CBS. “So, it is a perfectly legitimate target”, he continued, assuring that Israel “shares with our American friends all this information”.

An investigation called for by the Associated Press

When asked on CNN, Associated Press editor-in-chief and vice-president Sally Buzbee said she did not know what the IDF information was, saying that an “independent investigation into what happened” was necessary. According to Benjamin Netanyahu, the army has taken “all precautions to ensure that there are no civilian casualties.”

Reaffirming the Hebrew state’s “natural right to self-defense” after “unprovoked attacks on Jerusalem,” Benjamin Netanyahu suggested that the Israeli offensive against the Palestinian enclave would continue.

“We are trying to reduce the capabilities of Hamas”

“We will do whatever is necessary to restore order and calm, the safety of our people and deterrence,” he explained. “We are trying to reduce Hamas’ capabilities and reduce its willingness to do this again,” he said. “It will take time, I hope not too long, but it is not immediate.” Benjamin Netanyahu also denied that Israel refused a truce proposed by Egypt and accepted by Hamas.

“Frankly, if Hamas thought it could fire rockets and relax while taking advantage of immunity, that is not true,” he said, however, once again accusing the Palestinian group of “hiding behind its civilians by using them as human shields ”.