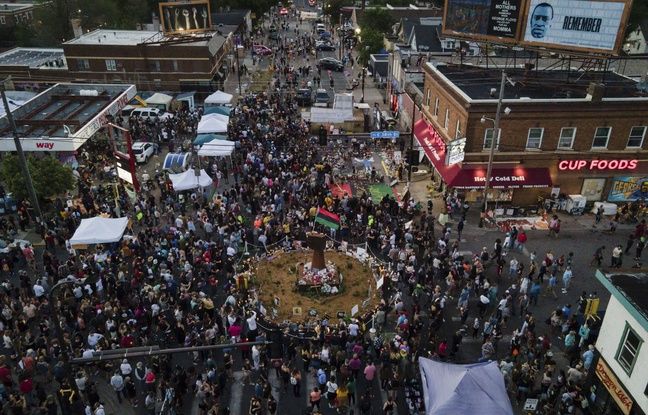 The tribute was not far from turning into a drama. One person was injured Tuesday in Minneapolis by gunfire at the site of George Floyd’s death, where scores of people had gathered a year to the day after the murder by Derek Chauvin.

About twenty detonations rang out shortly before 10 am, sowing panic in the assembly which ran for shelter. A display case was smashed and several casings littered the floor.

The injured in serious condition

Police went nearby after receiving calls from witnesses who saw a “vehicle leaving the scene at high speed,” said spokesperson John Elder. Shortly after, an individual presented to a nearby hospital with a gunshot wound. He is in serious condition but his life does not appear to be in danger, according to John Elder. No arrests have yet taken place.

The death of George Floyd on May 25, 2020, filmed and broadcast around the world, sparked an anti-racist surge across the United States. The country marks the first anniversary of this historic event on Tuesday with a series of commemorations and a visit by the Floyd family to the White House. In Minneapolis, George Floyd’s sister Bridgett and Mayor Jacob Frey observed several minutes of midday silence in a park that hosts a music festival in honor of the deceased.

After the shooting, the commemorations also resumed at the intersection which was the scene of the drama, where a vigil is to be held in the evening. Never reopened to traffic, this crossroads has been occupied for a year by anti-racist activists who have transformed it into a place of memory, with murals and various projects. But it is also a lawless area where the police are not welcome. Gunshots are frequent there, especially at night, and have left a dozen dead or injured in the area in a year, according to the police.

To help the neighborhood bounce back, the Floyd family has planned to devote half a million dollars to local economic actors or associations, out of the 27 million dollars in damages that the town hall has undertaken to pay it.