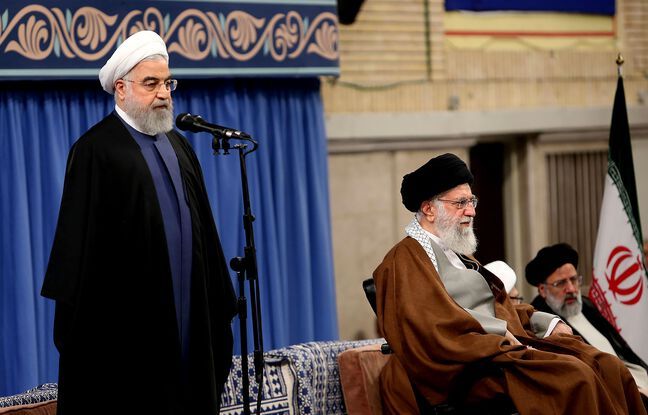 For the Iranian head of state, the future presidential elections lack candidates. Hassan Rouhani announced on Wednesday that he had written to Supreme Leader Ali Khamenei asking him to authorize the registration of new candidates for the election. Out of some 600 candidates in the June 18 election, the Council of Guardians of the Constitution, an unelected body responsible for overseeing the election, authorized seven to compete, including five ultra-conservative.

“The heart of elections is competition. If you remove that, you have a corpse ”, declared Hassan Rouhani in a televised speech, the day after the announcement of the rejection of the candidatures of his first vice-president Eshaq Jahanguiri and of one of his main allies, Ali Larijani.

The Iranians are called to elect a successor to Hassan Rouhani on June 18, in a climate of general discontent with the serious economic and social crisis that the country is going through, and after the violent repression of the waves of protest in the winter of 2017-2018 and November 2019.

For reformers and moderates who have governed with Hassan Rouhani since 2013, the solution to the country’s problems lies in the discussions underway in Vienna to try to revive the international Iranian nuclear agreement of 2015 by reintegrating the United States there. On the contrary, the ultraconservatives and many conservatives accuse Hassan Rouhani of exonerating himself from his responsibilities by attributing the current difficulties to the sole fault of the United States and Europeans, the former for having denounced this pact in 2018, the latter for n ‘have not helped Tehran to counter the devastating effects of the American sanctions against Iran restored or instituted since then.

To everyone’s surprise, the Council of Guardians invalidated Ali Larijani, former speaker of Parliament and adviser to Mr. Khamenei, as well as Mr. Jahanguiri, among other well-known names, appearing to offer victory on a set to the head of the judiciary. , the ultra-conservative Ebrahim Raïssi, who won 38% of the vote against Hassan Rohani four years ago. Many Iranian media saw in Ali Larijani the only candidate capable of overshadowing Ebrahim Raïssi, now a “candidate without rival”, according to the reformist newspaper Etemad.

Credited with broad support in public opinion, former President Mahmoud Ahmadinejad (populist) was also banned from the presidential election, but this decision was expected since it had already been invalidated in 2017.

While the few projections available suggest a very strong abstention on June 18, Hassan Rohani, who cannot stand again, worried about a lack of popular mobilization on polling day, judging that such a scenario could be harmful ” to maintain the legitimacy ”of the Islamic Republic. In February 2020, the legislative elections were marked by a record abstention (57%) against a backdrop of massive invalidation of moderate and reformist candidates, and disenchantment in the face of the failure of Hassan Rouhani’s policy of openness.

Ayatollah Khamenei has been pleading for weeks for “massive” and “revolutionary” participation on June 18. In 2005, his intervention led the Council of Guardians to finally validate the presidential candidacies of two politicians that he had initially rejected.

The election turned into a nomination?

The publication of the list of candidates authorized to stand is fueling an avalanche of criticism in Iran, where the Council of Guardians is regularly accused of selecting candidates in a completely arbitrary manner, or even of directly influencing, through its choices, on the results of the ballot. The Council’s decision “transforms the election into an appointment”, estimates Majid, an engineer: “Before it was disguised, now it is not even any more”.

“Farewell to reformism?” asks the reformist daily Shargh, for whom “even the most skeptical had not imagined that we could push towards the exit [toute une famille] Politics”.

Conversely, the ultraconservative newspaper Keyhan maintains that the Council of Guardians is constitutionally bound and that it “cannot act on the basis of personal preferences”. “It is crucial that the turnout is maximum on June 18, but this responsibility does not lie with the Council,” writes Keyhan, for whom the government will be solely responsible if voters shun the ballot box on that day.