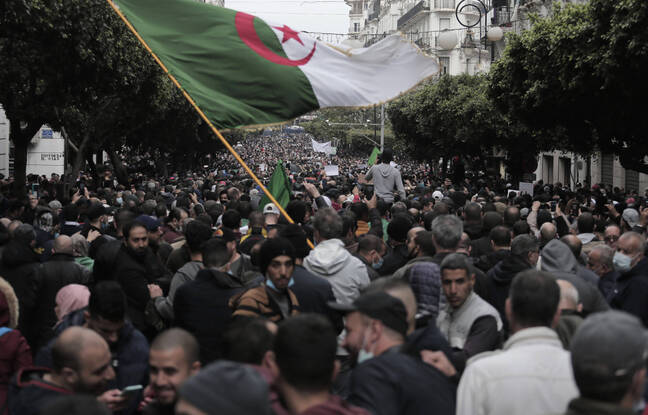 Thousands of demonstrators marched on Monday in the center of Algiers, and in the rest of the country, for the second anniversary of the popular uprising of the Hirak. This is the largest procession in the capital since the suspension of the Hirak marches on March 13, 2020 due to the Covid-19 pandemic.

The police, who tried to prevent the protesters from advancing towards the Grande Poste, the emblematic meeting place of Hirak, proceeded to arrests, sometimes muscular, according to witnesses. Among the slogans, the demonstrators sang to the address of the authorities: “We did not come for the anniversary (of the Hirak), we came for you to leave”.

There were also marches in the provinces, in particular in Annaba, Oran, Béjaïa, Sétif, Bouira, Mostaganem and Constantine, according to social networks. “There is a monstrous police device. the police vehicles circulate with flashing lights and sirens, creating a climate of fear, an anxiety-provoking climate, but despite everything people have decided to get out, ”confided a journalist from Oran (north-west).

“It’s a march worthy of the great days,” said another journalist in Constantine (north-east) for his part. In Algiers, the police had squared Algiers with an impressive police security device and installed filter barriers on several roads leading to the capital.

Launched on February 22, 2019, the Hirak, an unprecedented popular protest movement in Algeria, had pushed President Abdelaziz Bouteflika, in power for two decades, to resign two months later. This peaceful movement had to suspend its weekly marches on March 13, 2020 due to the coronavirus epidemic. But he continues to demand the dismantling of the “system” in place since independence in 1962, synonymous in his eyes with authoritarianism and corruption.