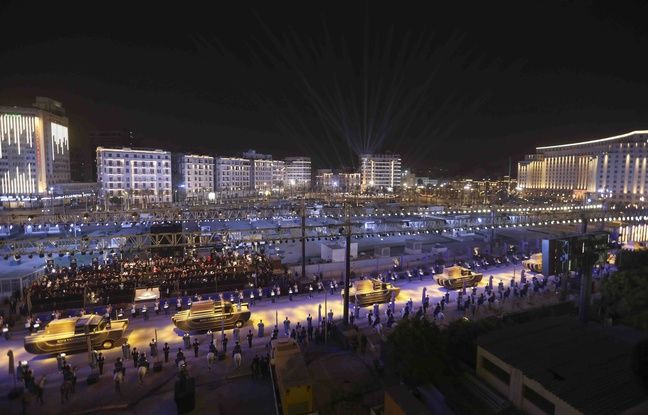 A historic parade. Twenty-two floats carrying mummies of kings and queens of ancient Egypt paraded this Saturday evening through the streets of Cairo during a show skillfully staged by the government.

Framed by a mounted guard, the first black floats adorned with golden and luminous patterns reminiscent of ancient funeral vessels left Tahrir Square and the Cairo Museum at 8 p.m., where the mummies had rested for more than a century.

The square was closed to traffic and pedestrians, as was the entire journey of some seven kilometers through the streets of Cairo to the NMEC located in the south of the capital. Under gunfire, the tanks arrived at the new National Museum of Egyptian Civilization (NMEC) around 8:30 p.m., greeted by President Abdel Fattah al-Sisi.

The show was broadcast live on Egyptian TV and Twitter, the Arabic hashtag #convoi_des_momies_royales was among the hottest global trends.

In chronological order, the pharaoh Seqenenre Tâa (16th century BC), nicknamed “the courageous”, led the way, closed by Ramses IX (12th century BC). Among the most famous mummies are those of the sovereigns Hatshepsut and Ramses II.

Bathed in a blue light, the procession left the century-old museum, accompanied by extras in Pharaonic costume, in chariots drawn by horses, under the beating of drums of a brass band and to a background of symphonic music.

Shortly before the start of the parade, a song by the very popular Egyptian singer Mohamed Mounir, composed for the occasion, opened the festivities. Several Egyptian actors including Ahmed Zaki, Mona Zaki and Tunisian Hend Sabry recited texts on Egyptian civilization.

In total, 60 motorcycles, 150 horses, 330 extras (sports students), 150 musicians and 150 percussionists from the Ministry of Defense were mobilized for the event, according to the authorities.

Earlier in the evening, President Sissi visited the NMEC, accompanied by its Prime Minister Mostafa Madbouli and the Director General of Unesco Audrey Azoulay, to review some of the collections. “With great pride, I am delighted to welcome kings and queens of Egypt after their journey,” President Sisi had tweeted earlier.

The NMEC, which occupies a large modern building, is scheduled to open to the public on April 4. But the mummies will not be on public display until April 18. Audrey Azoulay estimated, in a press release, that the move of the mummies to the NMEC was “the culmination of a long work to better preserve them and better display them”. A work in which Unesco took part.

Discovered near Luxor (south) from 1881, most of the 22 mummies had not left Tahrir Square since the beginning of the 20th century. Since the 1950s, they were exhibited there in a small room, without clear museographic explanations.

At the NMEC, they will appear in more modern boxes “for a better temperature and humidity control than in the old museum”, explains to AFP Salima Ikram, professor of Egyptology at the American University of Cairo, specialist of mummification. They will be presented alongside their sarcophagi, in a setting reminiscent of the underground tombs of kings, with a biography and objects linked to the sovereigns.

The macabre nature of the mummies has in the past put off more than one visitor. “I will never forget when I took (Princess) Margaret, sister of Queen Elizabeth II, to the museum: she closed her eyes and ran away,” says the famous Egyptian archaeologist Zahi Hawass.

“Curse of the Pharaohs”

After years of political instability linked to the popular revolt of 2011, which dealt a heavy blow to tourism, Egypt is seeking to bring back visitors, in particular by promoting culture.

In addition to the NMEC, Egypt is due to inaugurate within a few months the Grand Egyptian Museum (GEM) near the pyramids of Giza, which will house Pharaonic collections.

“The museum in Tahrir Square will not die, we will develop it” also assured the Minister of Antiquities and Tourism, Khaled al-Enany, on Saturday evening.

A few days before the event, under the hashtag in Arabic # malédiction_des_pharaons, many Internet users associated the recent disasters in Egypt with a “curse” which would have been caused by the displacement of the mummies.

In one week, Egypt experienced the blockage of the Suez Canal by a container ship, a train accident that left 18 dead in Sohag (south) and the collapse of a building in Cairo which resulted in death of at least 25 people.

The “curse of the pharaoh” had already been mentioned in the 1920s after the discovery of Tutankhamun’s tomb, followed by the deaths considered mysterious of members of the team of archaeologists.